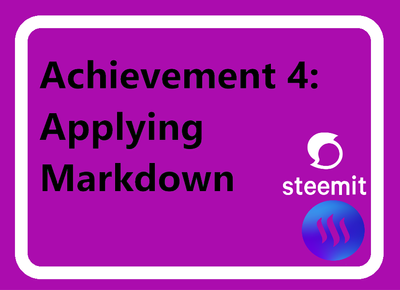 Headings form a vital part in the making of a presentation.

Headings guide a reader to have better understanding of what he or she is about to read.
This gives the reader a brief information about the article.

NB: in order to have the effect you have to leave space between the hashtag and the sentence.
An example is stated below;

Anytime we want to write quotes which was said or written by a popular person.
This is when blockqoute is useful.

The > is used in front of the the sentence.

This is an example;

“Any fool can know. The point is to understand.”
― Albert Einstein

''Any fool can know. The point is to understand.''
-Albert Einstein

centering a text or sentence

This is also known as aligning center a text.
we sometimes want to make part of our text be in the middle of the page.
It is done by adding;

As the name suggest, this feature is used to add a number or text beneath the baseline
It is also used to write note under a video or photo.

This is how it is done;

This feature is used to add a number or text above the baseline.

This is how it is done;

Adding codes when we are creating a content becomes a necessity.
When adding code there are different ways of doing it.
1.Insert one back tick (`)before and another after the markdown syntax.

This is an example;

come output will be >> come

when we want to italicize a text we begin it by putting a star(*) in front of the text and ending with another star without space.

Hey @qudus0, this is Aniqa Mashkoor one of the greeter helpers.

You have successfully completed your achievement 4 and now you can head towards completion of achievement 5. Please read and understand it first Achievement 5 : Understanding The Steem Tools

Remember that achievement 5 has 4 tasks and you have to make separate post for each task. And each task must be posted in Newcomers' Community.**