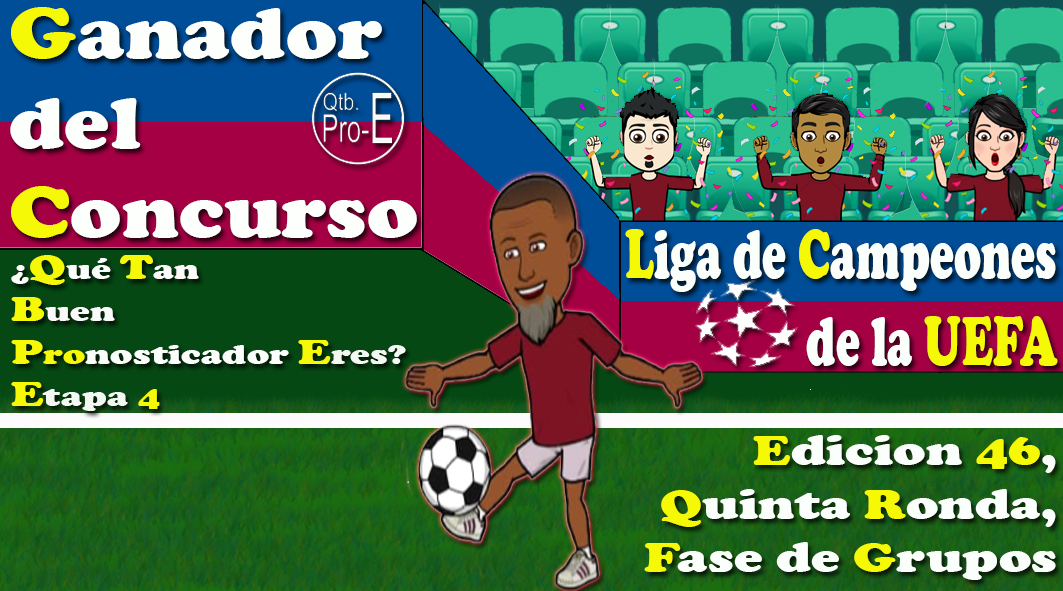 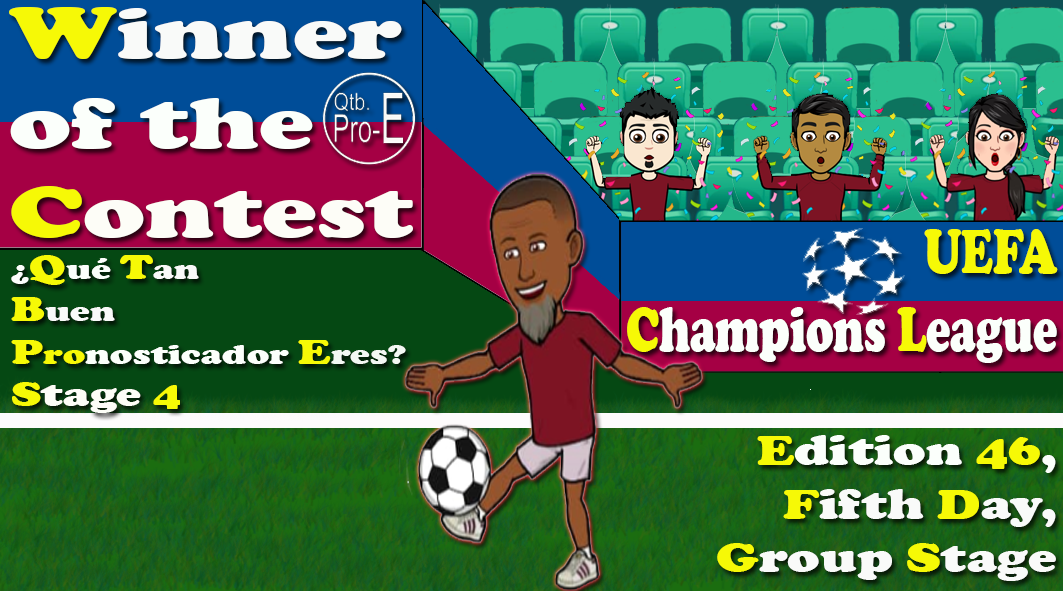 Winner of the Contest How good a predictor are you? Issue 46 #

Emoji created in Bitmoji. Images of my own authorship. Diagramming of my authorship

Greetings Futbolmaniacs of the #worldoffootball community! Kind regards to each of you and the rest of the great #steemit family.

This post is to announce the winner of the 46rd edition of the How Good a Predictor Are You contest, which covered Matchday 5 of the UEFA Champions League group stage.

Emoji created in Bitmoji. Images and layout by me

A day that could be defined as almost normal in terms of the forecasts that were generally predicted. Resuscitation of some, decline of others and some continue to show signs of falling.

What a match Manchester City and Paris Saint-Germain showed us. Although the English club's demonstration of superiority at home was quite evident, it was the visitors who scored first and turned the duel into something of gigantic proportions. The Citizen's secured first place in the group with this home win.

Leipzig, who were given very little chance of staying in any continental competition, thrashed visiting Brugge to put them in third place in the group and in with a chance of a place in the UEFA Europa League.

Liverpool, at half speed, achieved a victory with two magnificent goals. They secured the first place in this group and only have the last matchday left, which will be a formality.

Atletico Madrid complicated their participation in the greatest tournament of the old continent by losing at home against Milan. What a bad game Cholo Simeone's team played, who went out onto the field showing that they were going for the win, but after a few minutes that euphoria turned into disaster and disappointment. Now they must bet everything on winning away on the last matchday and linking a victory of their archrivals Liverpool.

Ajax managed to secure first place in the group thanks to a hard-fought win away to Besiktas. They started the game losing, but managed to come back from behind to win.

Real Madrid achieved two things as visitors. First of all, they woke up Sheriff from their slumber and unfortunately they have to wait to see if they will be among the 4 third places that will advance to the UEFA Europa League. Secondly, they managed to qualify to the next round despite the fact that many thought that Los Merengues would not make it due to their bad start in the competition.

Inter Milan, for their part, managed to qualify to the round of 16 of this tournament by beating the visitors from Donestk at home. The Italian club showed a good game, although with some difficulties and scares along the way. On the last matchday, the first and second place in this group will be decided between the two leaders.

Admittedly, Barça showed a notable improvement in their game. They were a forceful team that moved the ball at will, but failed to score the goal that would give them the three points and had to settle for a draw at home before the visit of Benfica. Barça's position to qualify is not an easy one. They must win at home to the irrepressible Bavarian club and hope that Benfica draw or lose at home.

The German club members of Bayern managed a hard-fought visit to Dynamo. The weather was inclement and the snow stopped the flow of the Bavarian club's play. A colossal Lewandowski opened the scoring with a colossal bicycle kick and the rest was history. The final matchday, which will pit the Bavarians against the Culés, will be spectacularly morbid due to the recent history of clashes between the two sides and the poor form of the Catalans.

United revived in the continental competition with a win away to Villarreal. The Spaniards were unable to defend their home ground and succumbed to the Red Devils, who are not doing well in the domestic tournament. They are now in first place in this group and will have to wait for the last matchday to see if they manage to stay in that position.

Atalanta managed an insufficient draw at the home of Young Boys. It is not bad, but they gave a break to Young Boys in the fight for the second place in this group.

LOSC remains at the top of the group standings thanks to a narrow win at home to visiting Salzburg. They are not yet assured of qualifying for the next round, but have a good chance of doing so.

Sevilla managed to get back to life in the tournament by winning at home against Wolsburg. They gave a good demonstration of compact soccer that rewarded them with three important points.

Everything will be defined in the last matchday for the 4 members of this group.

Chelsea managed to defend their home ground by obtaining an important win defending their home ground against visiting Juventus. This puts them in first place in the group, equal on points with the Italian club.

Malmo and Zenit drew and got one point each at the Swedish club's home. Both are out of Europe's top competition and if logic holds true on the last matchday, where the two leaders must win their matches, both clubs have no chance of continuing to play in any continental tournament.

I now show you the results of the two days of competition.

I am happy to announce that the winner of this edition was @miguel001122 who repeated triumph, but this time he got 48 points out of a possible 112 which is the maximum that could be obtained in the editions of this UEFA Champions League group stage.

Below is the table of participants with the points obtained:

I will leave a margin of three days for anyone who wants to report any error on my part when calculating the points to express it through the response section of this publication. I checked several times before posting and it always came out the same. Please check your points.

By Sunday, November 28th of this year, if there is no mistake on my part in the results, I will be awarding the prize to the winner.

In the accumulated section of the contest covering the UEFA Champions League, four rounds have already passed and it is interesting the positions of each participant in this contest. @rossalena refuses to let go of the top spot in the accumulated table, but @miguel001122 is on his heels and is just two points behind him. From third to sixth place in the table the fight is there. The rest of the teams have a chance, everything depends on them participating and scoring good points in the two remaining rounds.

Here I show you how they are doing:

So far, there are 1 rounds left in the group stage, so there are still 112 points to be gained in the accumulated UEFA Champions League predictions.

I would like to thank all the participants in the contest for the support received from you.

***Thanks to @worldoffootball for letting me create this contest*** #

Congrats to the winners