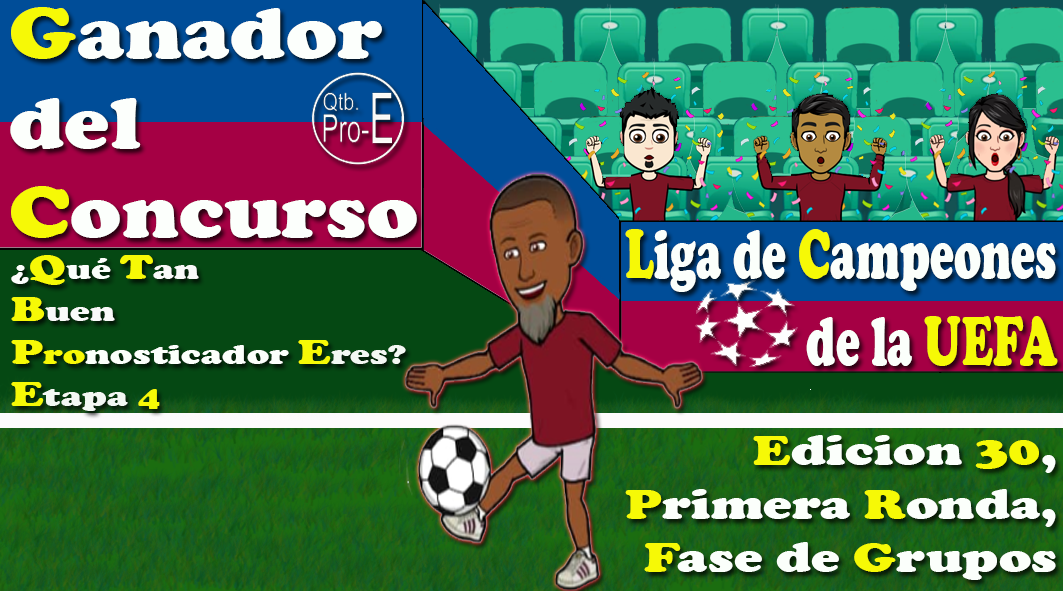 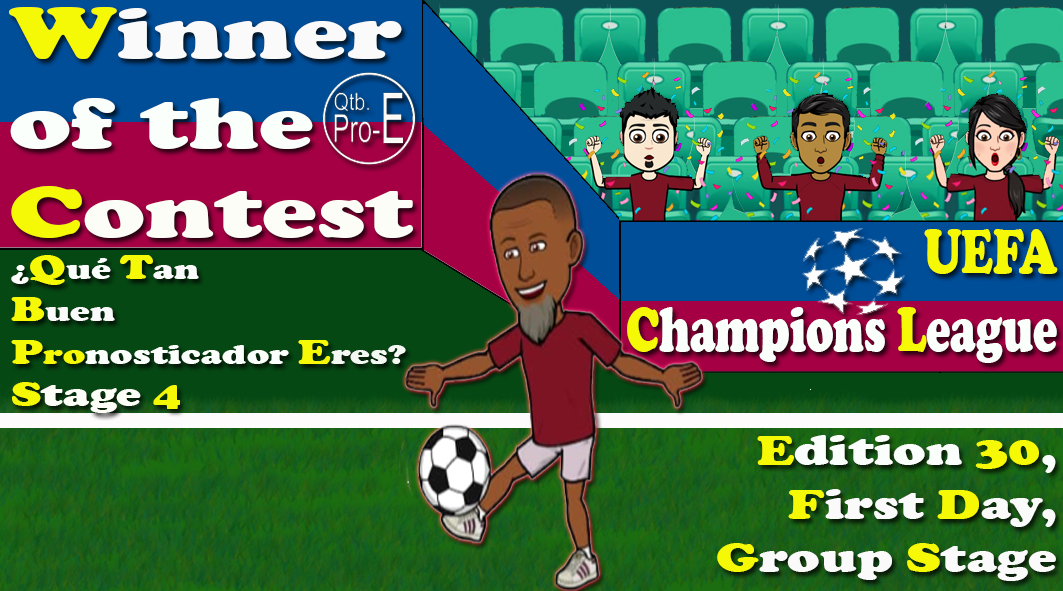 Winner of the Contest How good a predictor are you? Issue 30 #

Emoji created in Bitmoji. Images of my own authorship. Diagramming of my authorship

Greetings Futbolmaniacs of the #worldoffootball community! Best regards to each of you and the rest of the great #steemit family.

This post is to announce the winner of the 30th edition of the How Good a Predictor Are You contest, which covered Matchday 1 of the UEFA Champions League group stage.

Emoji created in Bitmoji. Images and layout by me

Let's see, what can we say about this week's top European club competition?

The victory of Young Boys over Manchester United I consider it a surprise. I was expecting the red devils' overwhelming machine. But I liked that a small team defended its home ground.

The draws between Sevilla - Salzburg, D. Kyiv - Benfica, Villarreal - Atalanta, Losc - Wolfsburg, could be considered logical for the start of this stage of the competition. Although many of us are inclined to give wins for some clubs.

As an avowed Culé myself, Barça's defeat at home could qualify as a tough setback for the Catalan club. A somewhat level first half that changed in the second half showing that Barça is in the midst of a rebuilding process.

Juve did their homework with a good final score. Chelsea did the same, but perhaps we expected a bigger scoreline, especially playing at home.

Dortmund did their job as visitors. They had a good approach and although the scoreline did not prove it, a lot is expected from this club in this edition of the European tournament.

Debutant Sheriff had a dream day beating Ukrainian club Donetsk who was the favorite to take all 3 points. The Moldovans must still be celebrating this victory as if they are trying to win the final of the competition.

Surprise, Surprise, Surprise! In the game between Brugge - PSG. The trident Mbappe, Neymar, Messi, was not enough to get an away win against the modest Belgian club. We should not jump to conclusions about the new trident of the French club. They need to be given some time to get used to the new trident. However, many of us were expecting the Parisians to score a big goal.

Nine goals in one game! This result suggests that Leipzig went all the way to England in search of three points. Of course, they were up against last year's runners-up, but that didn't make them any less so on the pitch.

The game of controversy in this matchday is the label that will be given to the clash between A. Madrid - Porto. There is a lot of criticism of the refereeing decisions of both those in charge of keeping order on the pitch, as well as those who direct the VAR. Will the bad performances of the VAR never be eliminated?

Liverpool and Milan gave us a match not for the faint of heart. The club from the land of pizza missed the opportunity to take home the 3 points. Liverpool reacted and showed respect at home. What many thought would be an easy match for the English, we were wrong.

Ajax showed that they are not playing in this edition and with a scandalous 0 - 5 defeat at the home of the Portuguese Spotting, they got the sign of a team that comes to look for something. It is still starting, but gives a good image in this start of the competition.

I do not know if it is the luck of the champion or that the Italian club could not hold the score, and perhaps looking to win the game ended up losing it. What is certain is that Real Madrid got the three points as visitors and that gives them a peace of mind in this beginning of the championship.

Now I show you the results of the two days of competition.

I'm happy to announce that the winner of this edition is a girl. The winner was @rosselena who scored 42 points out of a possible 112 which is the maximum that could be obtained in the editions of this UEFA Champions League group stage.

Below is the table of participants with the points obtained:

I will leave a margin of three days for anyone who wants to report any error on my part when calculating the points to express it through the response section of this publication. I checked several times before posting and it always came out the same. Please check your points.

By Sunday, September 19 of this year, if there is no mistake on my part in the results, I will be awarding the prize to the winner.

In this section of the contest, after talking with @jacorv, @bunker.universe, @emy.pets05 and @theatrorve, it was decided to make a publication on Saturdays and in the same to make reference to the positions of each predictor in each of the pro-tournament accumulated and the general accumulated.

So, for the following Saturday we will make such publication indicating each one of the accumulated of this contest in its stage 4.

I would like to thank all the participants in the contest for the support received from you.

***Thanks to @worldoffootball for letting me create this contest*** #