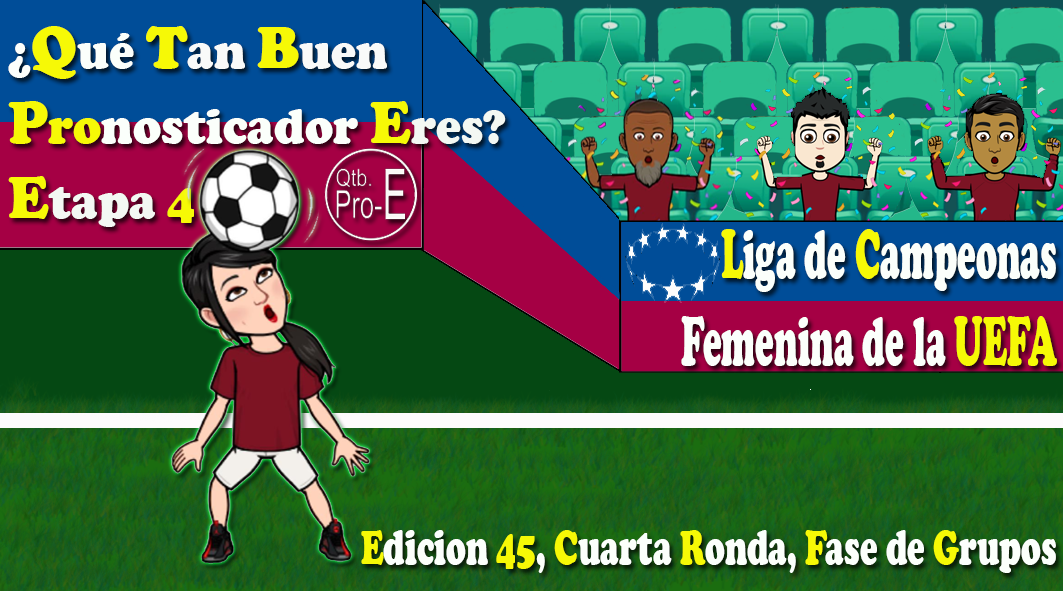 Emoji created in Bitmoji. Images and diagramming of our authorship.

Contest How good a predictor are you, stage 4 #

Greetings. A big hello to all the members of the #worldoffootball community and the rest of the big #steemit family.

***Due to several days without network connection, this contest is running late. I hope this inconvenience is not a reason for you not to participate.*** #

Very happy to be part of the How Good a Predictor Are You? contest in its fourth edition. I get the honor of covering the UEFA Women's Champions League.

Women's soccer is taking a big boom nowadays and is more supported and followed worldwide. The level of this women's competition is high and continues to rise.

There are clubs in this competition of great importance in Europe such as Bayer Munich, FC Barcelona, Arsenal, PSG, Atletico Madrid, Lyon, Juventis, Benfica, among others that show a level as high as their male counterparts.

There are also clubs like Hoffenheim, HB Køge, Kopparbergs/Göteborg FC, Servette FCCF, Kharkiv, Breidablik, among others that may not have a great fame but are here because of the merits achieved by their players.

Believe it or not, the Real Madrid women's team appears as a debutant in this tournament. Perhaps this is something that, for many, seems strange, but it is at this point that the Merengue club began to bet on this branch of the beautiful game.

This branch of the competition seems to us very interesting to predict since it will not only make the participants to investigate the trajectories of the participating clubs in this tournament, but it will not be as easy or logical to predict the different matches as in the men's pair.

For this reason we decided to cover this important event at the European club level and with great joy I present to you the 45th edition dedicated to the fourth round of the group stage of this competition. 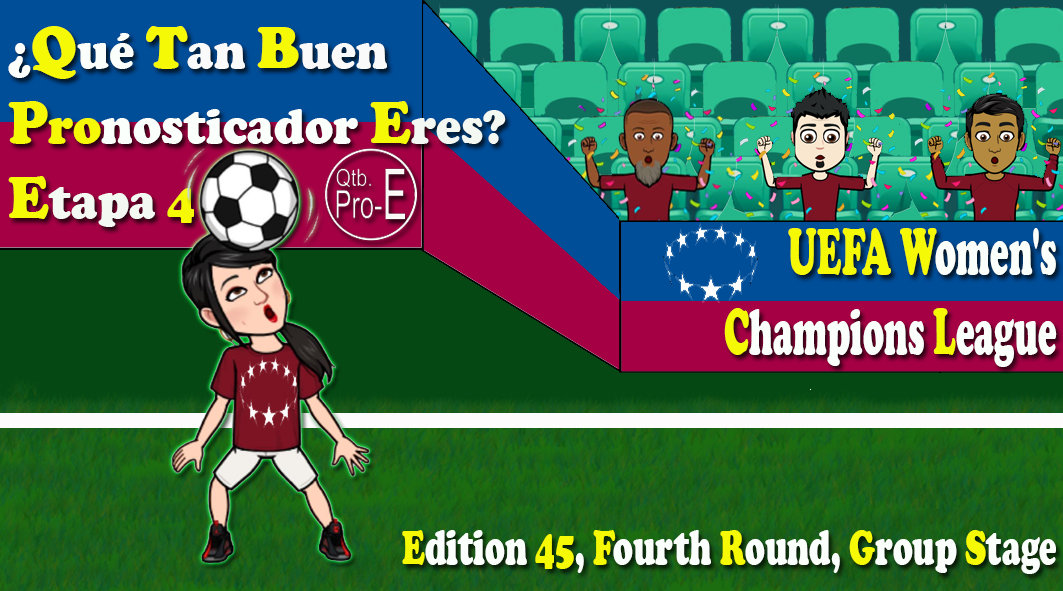 Emoji created in Bitmoji. Diagramming of our authorship

Soccer is a passion that moves us every time we can appreciate it, both on the soccer fields of the different stadiums around the world, as well as on the television screen of the channels that broadcast the different tournaments.

This assiduous following of the sport makes many of us become experts in the matter, capable of analyzing in depth the performance of the different teams that compete in these tournaments. This knowledge makes us become prognosticators.

This "gift" or "agility" has always been an extra when watching soccer games. This extra is the main reason for the creation of this contest. It seeks to make that extra productive and competitive among those who participate in it.

With the change in the format of the contest in terms of the number of hosts and tournaments to predict, the possibilities increase.

One of the modifications that will be implemented in this stage 4, now there are 3 ways to participate in it:
- For each edition of the same.
- In parallel, in a cumulative that covers the entire stage 4 of the tournament that I organize in this contest. This means that the accumulated will cover (X tournament for which I am responsible).
- In parallel, in a cumulative that will cover the 4 tournaments organized by the members of the group of the contest in this stage 4.

In the way of participation, by edition, will be placed in this publication the games corresponding to the first round of the UEFA Champions League for you to make the prediction of how will be the result of the same.

The way for all of you to participate is by placing the results of each game of this round, which has two ways of scoring:

- The first one is by guessing the winner of each game. To make it clearer the participation is the following example:

From this game they must predict which of the two clubs will win the game or if they consider that there can be a draw between the two.

With this result each participant in the contest will get 3 points if they get it right.

- The second is by guessing the score of the game. As an example we will place the same game:

If this was the final score of the game and you placed this score, you will get 4 extra points if you get it right.

At the end of the day, the points obtained by the participants will be added up and the winner will be declared the one who gets the most points.

The second way to participate in the contest is as follows. The points obtained by each participant in the contest during stage 4 of this contest will be added up, and as mentioned above, it will cover (the tournament that you organize) in its group phase. At the end of this phase of the tournament, the participant who obtains the most points will be awarded the prize.

***Any doubts please express them in the answer section of this publication.*** #

It's my turn to cover The UEFA Women's Champions League, in the group stage and for this edition you must predict the games of the first matchday of this stage.

I will show you the games of which you must predict the results in the way I mentioned in the section How is the contest.

Here are the games:

These are all the games to predict in this edition. There are 8 games among which there are some with a lot of morbidity on the part of the followers. Please try to be as specific as possible in your predictions since there is little time to publish the predictions of the participants that I always do.

The way to participate is very simple. You must create a post with your predictions and place it in the #worldofffotball community. Such participation must follow the following rules:

1 - Only one publication per participant is allowed.
2 - They must respect the order established for each match, both by day, as well as by positions of each club in the same.
3 - Under no circumstances can the publication be re-edited once it has been posted on the blog. Therefore, I recommend you to be very sure of your predictions to avoid penalties for re-publishing.
4 - Use the following tags in your posts #worldoffootbal, #country (to which you belong), #steemexclusive, #(organizer), #qtb.pro-e among the first five tags.
5 - Place a link to your publication in the reply section of this document.

Failure to comply with any of these rules will result in the predictor's participation in the contest being disregarded. THIS IS NON-NEGOTIABLE.

it would be very helpful if in the publications that you make to participate in the contest you can make a delegation for qtb.pro-e of 5% and another one for #worldoffootball of 5%. The first one would help us to increase the amount of the prizes. The second to implement the power of the community. THIS IS NOT MANDATORY AND FAILURE TO DO SO DOES NOT PREJUDICE PARTICIPATION IN THE CONTEST.

It would be very helpful if you can vote this publication and give it to republish so that it reaches more people on the platform.

At the start of stage 4 of the contest the prize per edition will be 15 STEEM for whoever gets the most points at the end of the day.

In the section of the accumulated prize per tournament, 10 STEEM will be awarded for each day of the group stage of the tournament. The amount of the prize is estimated to reach 60 STEEM.

In the general section of the contest, 5 STEEM will be placed for each day of the 4 tournaments covered by the contest. We estimate that the final amount of the prize pool would be 120 STEEM.

I consider that it is a striking prize for all participants in any of the modes proposed by us.

Any contribution to increase these prizes will be welcome. Making such contributions does not ensure any advantage in the contest.

Entries will be received until 23:59 Venezuela time, on.

No entries will be accepted after the above mentioned time.

***Thanks to @worldoffootball for letting me participate in this contest.*** #

Is another good contest for all the members of the steem community, but the last contest on the Women champions league, the results was not posted.

Good day @qtb.pro-e, here is my participation ticket for the contest.
https://goldvoice.club/steem/@sahmie/contest-how-good-are-you-5-wof-5-qtb-pro-e

Here is my entry