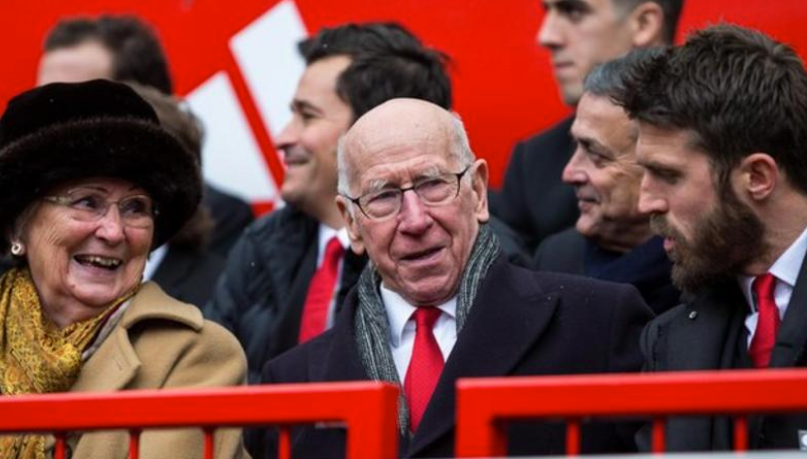 The news follows the deaths of his older brother Jack in July and fellow World Cup-winner Nobby Stiles on Friday, both of whom had also been diagnosed with dementia.

Sir Bobby, 83, won three league titles, a European Cup and an FA Cup with United during 17 years at Old Trafford.

He finished his career with spells at Preston and Irish side Waterford.

His wife, Lady Norma Charlton, expressed the hope that the knowledge of his diagnosis - first reported by the Telegraph - could help others.

Air crash survivor and Ballon d'Or winner
Joining United in 1953, he scored 249 goals in 758 games for the club, long-standing records which were eventually broken by Wayne Rooney in 2017 and Ryan Giggs in 2008 respectively.

Born in Ashington, Northumberland, he remained England's record goal scorer until Rooney surpassed him against Switzerland in September 2015.

At the age of 20, Sir Bobby was a survivor of the Munich air crash of 1958 in which 23 people died, including eight of his Manchester United team-mates.

He inspired United to a first European Cup win in 1968, scoring twice in the final, and was awarded the Ballon d'Or in 1966 after playing every minute of England's World Cup victory.

Dementia in football
Sir Bobby is the fifth member of England's 1966 World Cup-winning side to be diagnosed with dementia.

In addition to his brother, Jack, and Stiles, both Martin Peters and Ray Wilson - who died in 2019 and 2018 respectively - also had the condition.

Stiles, Peters and Wilson were diagnosed with it while still in their sixties. In a BBC documentary screened in 2017, Stiles' son John told former England captain Alan Shearer he was "utterly convinced" heading a football was responsible for his father's dementia.

A study by Glasgow University in 2019 found former professional footballers are three and a half times more likely to die of dementia than people of the same age range in the general population.

The study began after claims that former West Brom striker Jeff Astle died at the age of 59 because of repeated head trauma and compared deaths of 7,676 ex-players to 23,000 from the general population.

The inquest into Astle's death found heading heavy leather footballs repeatedly had contributed to trauma to his brain, but research by the Football Association and the Professional Footballers' Association was later dropped because of what were said to be technical flaws.

Astle's daughter, Dawn, said "players who have suffered dementia must not be a statistic" after she was left "staggered" by the study's findings.

In response, the FA launched new coaching guidelines to restrict the amount of heading by under-18 players in training.