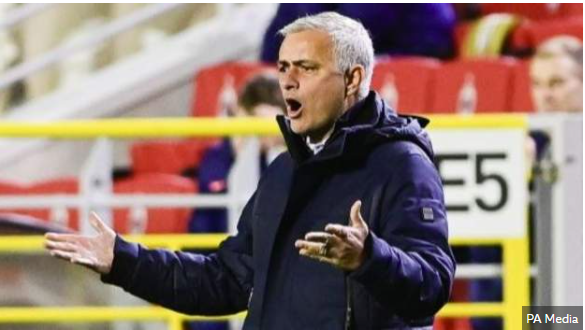 Get Involved bbcfootball or text 81111 (UK only)

What's to come...
So Jose Mourinho insists the Tottenham players must report for training at 11 this morning, ahead of their game with Brighton on Sunday.

Meanwhile, a host of Mourinho's managerial rivals will be speaking to the media today as several Premier League clubs hold their news conferences before their games this weekend, beginning with Manchester United, Newcastle, Aston Villa and West Ham.

I would have taken them all off at half-time - Mourinho

Mourinho made four changes at half-time after appearing to lose patience with some of his fringe players in Belgium.

Dele Alli, Steven Bergwijn, Giovani lo Celso and Carlos Vinicius were all replaced at the break, although the changes did not salvage a point.

"I would like to have made 11 changes at half-time," said Mourinho.

England midfielder Alli, 24, has started three matches this season and been replaced at half-time in two of them. This was the first time he had been in the starting XI for more than a month.

"I don't want to analyse individuals. I don't like to do that," added Mourinho. "We have a big squad with lots of good players.

"It's my responsibility to give them opportunities to play and catch the chance with both hands and be in condition to ask for more. And tonight my future choices are going to be very easy."