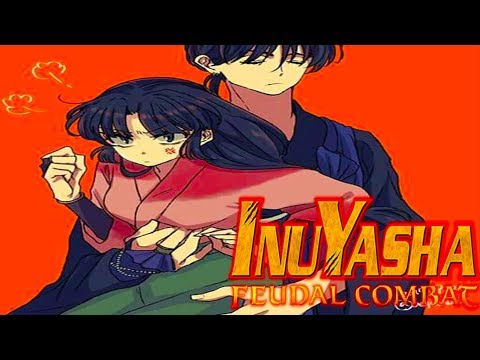 Inuyasha: Feudal Combat, up to four characters, two per team, may be present at once in a battle, however, two player characters cannot be on the same team. (IE: Player 1 as main fighter; Player 2 as their partner) Both the player and opponent may each select another character as their partner. There are four modes of gameplay, including Story, Mission, Battle, and Practice modes.

When the Spirit Gauge is full, a special Finishing Move can be performed. Each character's basic Finishing Move can be activated by pressing and holding the circle button. But when a character is fighting alongside a partner and the duo reaches Great affinity, pressing circle will trigger a combined Finishing Move, a combined team attack between the two characters. Certain player/partner combinations will have their own special finishing move together. Those combinations are:

(Remember: The player can be either of the characters, so can the partner)

Affinity will have an effect on what the characters say to each other.

Bad Affinity - Not very good at all.
Normal Affinity - What they'd normally treat each other.
Good Affinity - Pretty well.
Great Affinity - Good enough to pull off the Combined Finishing Move.
Also, some characters will have a certain affinity from the start. For example, Inuyasha and Koga will have a low affinity, however, Inuyasha and Kagome will have a high affinity. In Story Mode, the player must choose to follow first Inuyasha's, then Sango and Miroku, then Sesshomaru's, and finally Shippo's "Chapter". These consist of a series of battles interlaced with cut scenes illustrating a story. If the player is KO'd (knocked out) in one of these battles, a screen with the option to reattempt the last battle is available. If each of these stories is completed without the player getting KO'd even once, then a new character can be selected in "Battle", "Practice", and "Mission" modes as the player/partner. Those characters are: