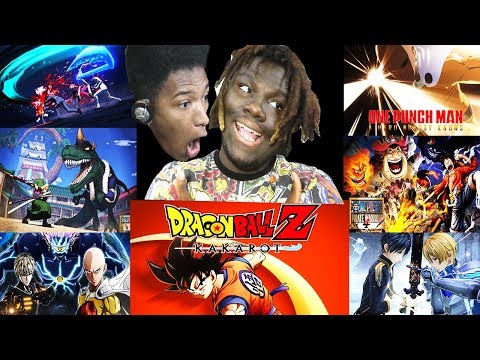 Bandai Namco Trailers Review Dragon Ball Z: Kakarot is an upcoming Dragon Ball video game developed by CyberConnect2 and published by Bandai Namco for PlayStation 4, Xbox One and Microsoft Windows via Steam set to be released in January 17, 2020. It is an Action Role Playing Game that will cover Goku's story as the player takes him through different iconic events in the Dragon Ball Z story, ranging at least from the start of the Saiyan Saga to the end of the Majin Buu Saga. This game will also feature remixed excerpts of Shunsuke Kikuchi's soundtrack from the original Japanese broadcast of the Dragon Ball Z anime.

One Piece: Pirate Warriors 4 is an upcoming action-adventure video game developed by Omega Force, Koei Tecmo and published by Bandai Namco Entertainment for Microsoft Windows, PlayStation 4, Xbox One, Nintendo Switch. It is the fourth installment in Pirate Warriors video-game series, based on the One Piece franchise. One Punch Man: A Hero Nobody Knows (ワンパンマン ヒーローノーバディノウズ) is the first official One-Punch Man video game announced for PC, PS4, and Xbox One. Published by Bandai Namco Entertainment, the game was announced on 26th June 2019. This trailer from Tokyo Game Show reveals some latest game screens, scenes and lines, that narrates the stories in "SWORD ART ONLINE Alicization Lycoris". In addition to Kirito, Eugeo and Alice, this trailer also features Cardinal and Asuna! Look forward to the story of the game version of “Alicization”, which will be accompanied by the original heroine Medina.

Sword Art Online: Alicization Lycoris is set to release for PlayStation 4, Xbox One, and PC in 2020. You can find the trailer, gameplay, and screenshots from the Sword Art Online Beaters’ Meeting 2019 here, and the announcement information here. Tokyo Ghoul: re Call to Exist, similarly to the manga, takes place in an alternative version of modern Japan. A race of ghouls exists next to the regular humans. These ghouls are paranormal creatures that must feed on human flesh in order to survive. They are hunted by CCG organization that is recruiting detectives with a high combat potential.