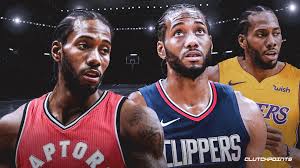 Raptors
After 1 season and 1 championship Raptors fans have every right to feel he will stay with them. They have showed him love and he has the whole country behind him, but it is cold lol

Clippers
They have a top back room staff and he will feel that he is the man and can single handedly deliver them glory as he did in Toronto. If he did so would have to go down as one of the best of all time. He is already great but will be immortal if he did it with 3 average teams at best

Lakers
Well its the Lakers. This would be the most formidable team possibly ever. LeBron may be in his latter years but every team would have him. A Davis has alot to prove but get the feeling he will this season. Kwahi added to that would make a monster team. I would just start them 3 forget 4-5 lol

Will definitely be interesting to see where he decides to go

I think the Raptors or Lakers are the two best place for him to go if he wants to be champion again.
Bron will be the third wheel then.
At least Bron is winning he would not mind be it.
Keep on postin

Yeah agree. Lakes will walk it none can challenge them this year if he joins

I'm hoping for the Lakers myself. I'd love to see AD, LeBron and Kwahi + 2 fans playing together each night.

Would be the best 3 ever in my opinion