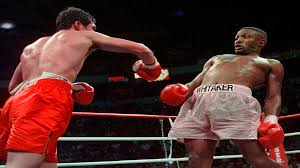 If you dont know who this is then sorry but...

Cant argue with Roger, who lost to this guy
The reason you probably aint heard about him is because he was at his prime at the same time as a young lad by the name of Iron Mike Tyson and at the time he had boxing in his hand as the heavyweight champion so less coverage was given to the other weight divisions.
If you haven't seen this guy just youtube him you wont be disappointed.
People talk highly of people once they pass away so listen to boxers talking about him previously almost all agree he was the greatest defensive fighter of all time and the ones that dont are bitter.
Defensive would suggest boring thats what floyd made the art but this guy just didnt get hit and had the best balance you could probably want as a boxer.
Im taking about all time top 10 Pernell 'sweet pea' Whitaker.
He won olimpic gold in 1984 after captaining the team, which included no other than Evander Holyfield.
He is most known for his fight against Julio Cesar Chaves.
Chaves was 87-0 when he faced Sweet Pea and was given a draw. Watch this for yourselves on youtube everyone knows sweet pea got screwed over. He faught Oscar de la hoya and Felix Trinidad at the later stages of his career.
Sweet pea was by far the greatest defensive boxer noone even comes close.
Have a look at his career highlights and some of his fights you wont be disappointed
RIP Sweet Pea