Pressure vs No Pressure 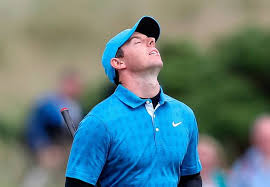 These past 2 days for me have shown how much of a mental game sports is compared to just ability
After being tipped as favourite, playing at home in front of an expectant crowd, nation, it is quite obvious that it got to Rory and lets face it he bottled it.
Fast forward a day later with zero expectations and almost no chance of making the cut, he managed to produce one of the rounds of his life and almost made it to day 3 which would have been a minor miracle.
People look at the money these guys make and expect them to automatically perform but its not that easy. If it were everyone that takes part would be battling at the top but they don't.
Many never make it to the top, the few that do find it very difficult to sustain there hunger,desire to remain there.
Well done to Rory for giving his fans something to cheers about unfortunately too little too late

Thank you for your presence on Marlians. The reward pool will go down as more users stake but this isn't established yet. We will analyze the first 7 days and see how it is and determine if to increase the token-emission rate for more sufficiency. We want to make it a home here, so it won't all be about 'financial earnings' but 'a variety of rewards'. It is a gradual process.

We have added @marlians.sports so that we can supports sports-related posts on marlians too. You earn some MARLIANS and SPORTS as a result.

Then we will have for #spt, #aaa, #pal #steemleo and more as well as manage to get more voting power on the aforementioned platforms and share as much as possible. Stay awesome.

Don't forget to vote on 'steemgigs' witness here.
Subscribe to UloggersTV too

Missed cut by a shot. Was tense watching it. Felt sorry for him