Ruiz Jr vs Joshua II: Anthony Joshua insists defeat was caused by 'a punch sent by the gods' 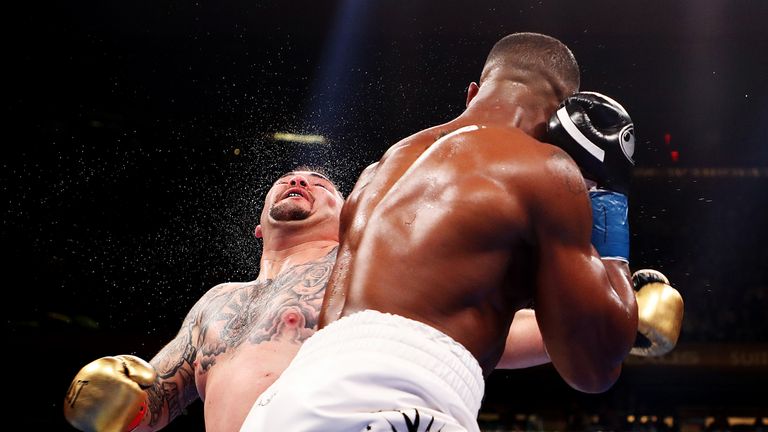 Watch Anthony Joshua at his most brutally honest as he discusses his defeat to Ruiz Jr, the rematch and the conspiracy theories on AJ: The Untold Truth – On Demand, then on Sky Sports Main Event at 8.30pm on Saturday

Anthony Joshua believes "a lucky punch" caused his shock defeat to Andy Ruiz Jr and has criticised his rival for taking too long to conclusively end their fight.

Joshua was floored four times in seven rounds when he lost his IBF, WBA and WBO heavyweight championships to Ruiz Jr but has a chance at redemption in a rematch in Saudi Arabia on December 7, live on Sky Sports Box Office.

oshua insists that, after he was initially hurt in the third round, Ruiz Jr should have showed more ruthlessness.

"So I'm just shocked it took Ruiz Jr another four rounds to get me out.

"Let me concuss Ruiz Jr - he won't get back up.

"Ruiz Jr got hit by a flash knock-down - he was still raw, he wasn't well-done, he wasn't cooked yet. I should have left him a little bit longer. But the instinct in me was: 'Boom!'

"I ended up getting caught with a left hook on the top of the head.

"He ain't that skilful. He's a good fighter."

Asked what he must change to win the rematch, Joshua said: "Do what I did in round three, but with more silky skill. And that was easy to put him down. So I need to be smarter, next time.

"It was never the game-plan to have my arms low, and be over my front foot."

oshua became embroiled in a row with Lennox Lewis, the last undisputed heavyweight champion, after calling him "a clown" on AJ: The Untold Truth.

Lewis tweeted that he was "disappointed in AJ's words" after Joshua said: "I don't respect Lennox."

The back-and-forth comes after Lewis called into question Joshua's trainer Rob McCracken in the wake of defeat to Ruiz Jr.