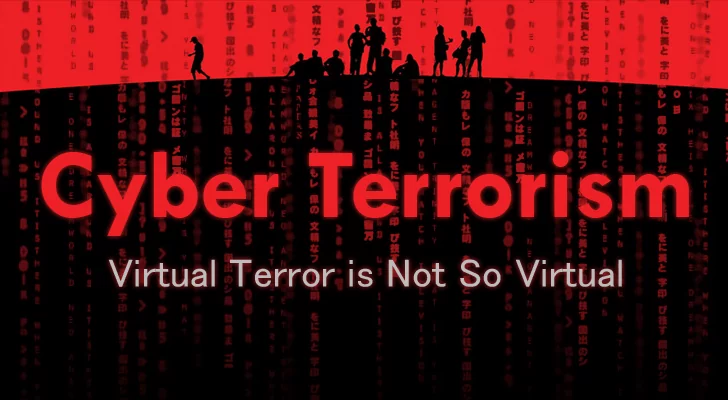 Nowadays the security issue on the internet is one of the global issues that we are facing. Terrorism has taken new dimensions and we are facing the worst form of terrorism popularly known as "Cyber Terrorism".Today I will discuss the various forms of cyber terrorism and will explain how to deal with cyber terrorists. I will also mention the laws regarding cyber security.

Cyberterrorism means an intentional ,negative and harmful use of Information Technology(IT) for producing destructive and harmful effects to someone else's property.
For the sake of simplicity,hacking of a computer system and then deleting valuable and business information of the rival is known as cyberterrorism.

Cyberterrorism completely goes against this law because an individual's privacy is being violated with various cyber attacks in the world.

IT can be misused for appropriating the valuable government secrets and data of private individuals and government agencies.A computer network owned by the government may contain valuable information concerning defense and other top secrets, these top secrets are targeted by the terrorists to facilitate their activities, including the destruction of properties.

Demolition of E-governance base

Cyberterrorism targets the E-governance database to damage the connection between the people and the government. As result, Cyber terrorists can reveal the secrets of the government including the trading secrets.

The main aim of cyber-terrorist activities is to cause network damage and disruptions.This process involves a combination of computer tampering, virus attacks, hacking, and many many more. After the attack, the network gets collapsed and resulting in the network system being offline.

Cyber Attacks in the World!

Here above it is visible to us that the rate of cyber attacks and malware infections has grown exponentially high. As it was only 61.9% in the year 2014 but as the world is evolving and every daily work is dependent on the internet and computer devices, these cyber crimes have also increased.

Cyberterrorism is a very global issue and every individual person around the world should be very safe from this cyber-terrorist and the government should ensure their safety. It is very important that we take action against these gangs and mafias and remain highly vigilant and protect their privacy at any cost.

Good post dear friend keep it up bro and keep learn with our steem fellows and friends.