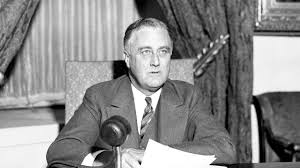 Franklin Delano Roosevelt was born on January 30,1882,in Hyde Park,NewYork,USA.He who served as the 32nd President of the United States of America from 1933 until his death in 1945. A member of the democratic Party, he won a record four presidential elections.
Roosevelt took office in the midst of the Great Depression, the worst economic crisis in United States History. Roosevelt spearheaded unprecedented federal legislation and issued a profusion of executive orders that instituted the New Deal—a variety of programs designed to produce relief, recovery, and reform. He created numerous programs to provide relief to the unemployed and farmers while seeking economic recovery with the National Recovery Administration and other programs. He also instituted major regulatory reforms related to finance, communications, and labor, and presided over the end of Prohibition. He harnessed radio to speak directly to the American people, giving 30 "fireside chat" radio addresses during his presidency and becoming the first American president to be televised.