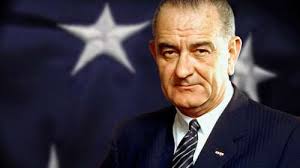 Lyndon Baines Johnson was born on August 27,1908,in Stonewall,Texas,USA.He was an American politician who served as the 36th President of the United States from 1963 to 1969. Formerly the 37th vice president from 1961 to 1963, he assumed the presidency following the Assassination of the president John F.Kennedy. A Democrat from Texas, Johnson also served as a United States Representative and as the Majority Leader in the United States Senate. Johnson is one of only four people who have served in all four federal elected positions.
In domestic policy, Johnson designed the "Great Society" legislation to expand civil rights, Public Broadcasting, Medicare, Medicaid, aid to education, the arts, urban and rural development, public services and his "War on Poverty". Assisted in part by a growing economy, the War on Poverty helped millions of Americans rise above the poverty line during his administration