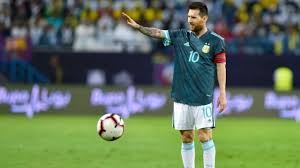 Lionel Andrés Messi Cuccittini(born 24 June 1987) is an Argentine professional footballer who plays as a forward and captains both Spanish club Barcelona and the Argentina national team.
Often considered the best player in the world and widely regarded as one of the greatest players of all time, Messi has won a record-breaking six FIFA Ballon d'or/Best FIFA Men's Player awards,and a record sixEurpion Golden Shoes. He has spent his entire professional career with Barcelona, where he has won a club-record 34 trophies.