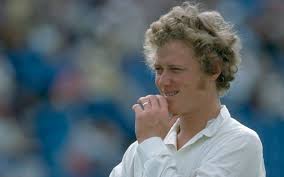 Kimberley John Hughes (born 26 January 1954) is a former cricketer who played for Western Australia, Natal and Australia. He captained Australia in 28 Tests between 1979 and 1984 before captaining a "rebel" Australian team in a tour of South Africa, a country which at the time was subject to a sporting boycott opposing apartheid.

A right-handed batsman, Hughes was seen to possess an orthodox and attractive batting style. He was identified as a potential Test cricketer from an early age, but his impetuous style of batting, and personality clashes with influential teammates and opponents such as Dennis Lillee and Rod Marsh, saw a later introduction to first-class and Test cricket than anticipated. During the split between the establishment Australian Cricket Board and the breakaway World Series Cricket, Hughes stayed with the establishment.