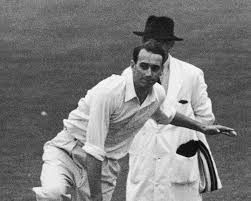 James Charles Laker (9 February 1922 – 23 April 1986) was an English cricketer who played for Surrey County Cricket Club from 1946 to 1959 and represented the England cricket team in 46 Test matches. He was born in Shipley, West Yorkshire, and died in Putney.

For his achievements in 1951, Laker was selected by Wisden Cricketers' Almanack as one of the five Wisden Cricketers of the Year in its 1952 edition. He was selected as the New Zealand Cricket Almanack Player of the Year in 1952 after playing for Auckland in the 1951/52 season. In 1956, his Surrey benefit season realised £11,086 and, at the end of that year, he was voted "BBC Sports Personality of the Year", the first cricketer to win the award. He later worked for the BBC as a cricket commentator in its outside broadcast transmissions.