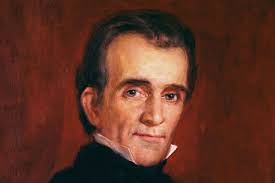 James Knox Polk was born on November 2,1795,in Pineville,North Carolina,USA.He was the 11th president of the United States, serving from 1845 to 1849. He previously was the Speaker of the House of Representatives (1835–1839) and governor of Tennessee (1839–1841).He was a member of the democratic Party and an advocate of Jacksonian democracy.
Polk presided over a country whose population had doubled every twenty years since the American Revolution and which had reached demographic parity with Great Britain. Polk's tenure saw continued technological improvements, including the continued expansion of railroads and increased use of the Telegraph. These improved communications and growing demographics increasingly made the United States into a strong military power, while also stoking expansionism.
Polk set four clearly defined goals for his administration:
● Reestablish the Independent Treasury System—the Whigs had abolished the one created under Van Buren.
● Reduce tariffs.
● Acquire some or all of the country.
● Acquire California and its harbors from Mexico.
While his domestic aims represented continuity with past Democratic policies, successful completion of Polk's foreign policy goals would represent the first major American territorial aims since the Adams–Onís Treaty of 1819.