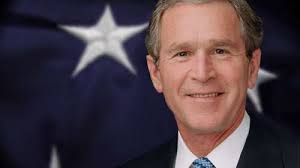 George Walker Bush was born on July 6,1946, in New Haven,Connecticut,USA.He is an American politician and businessman who served as the 43rd President of the United States from 2001 to 2009. He had previously served as the 46th governor of Texas from 1995 to 2000.
Bush took office during a period of economic recession in the wake of the bursting of the dot-com bubble.The terrorist attacks also impacted the economy. His administration increased federal government spending from $1.789 trillion to $2.983 trillion (60 percent), while revenues increased from $2.025 trillion to $2.524 trillion (from 2000 to 2008). Individual income tax revenues increased by 14 percent, corporate tax revenues by 50 percent, customs and duties by 40 percent. Discretionary defense spending was increased by 107 percent, discretionary domestic spending by 62 percent, Medicare spending by 131 percent, social security by 51 percent, and income security spending by 130 percent. Cyclically adjusted, revenues rose by 35 percent and spending by 65 percent.The September 11 terrorist attacks were a major turning point in Bush's presidency. That evening, he addressed the nation from the Oval Office, promising a strong response to the attacks. After September 11, Bush announced a global War on Terror. The Afghan Taliban regime was not forthcoming with Osama bin Laden, so Bush ordered the invasion of Afghanistan to overthrow the Taliban regime.