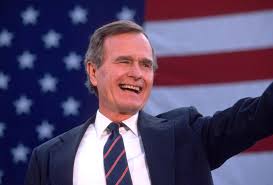 George Herbert Walker Bushwas born on June 12.1924,in Milton Massachusetts, USA.He was an American politician and businessman who served as the 41st President of the United States from 1989 to 1993 and the 43rd vice president from 1981 to 1989. A member of the Republican Party, Bush also served in the U.S. House ofRepresentatives, and as Director of Central Intelligence. Bush is usually known as George H. W. Bush to distinguish him from his eldest son George W. Bush , who served as U.S. President from 2001 to 2009.
Early in his term, Bush faced the problem of what to do with leftover deficits spawned during the Reagan years. At $220 billion in 1990, the deficit had tripled since 1980. Bush was dedicated to curbing the deficit, believing that America could not continue to be a leader in the world without doing so.On April 5, 1989, Bush submitted to Congress the Educational Excellence Act of 1989, a seven-program education legislative proposal with the intent of achieving "a better-educated America.The proposal was opposed by Republicans seeking to shrink government's role in education and met with a lack of enthusiasm by Democrats.