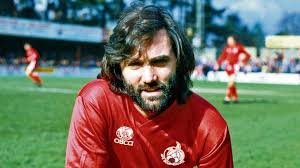 George Best (22 May 1946 – 25 November 2005) was a Northern Irish professional footballer who played as a winger, spending most of his club career at Manchester United. Named European Footballer of the year in 1968, he is regarded as one of the greatest players of all time.
A highly skillful winger, considered by several pundits to be one of the greatest dribblers in the history of the sport, Best received plaudits for his playing style, which combined pace, skill, balance, feints, two-footedness, goalscoring and the ability to get past defenders.