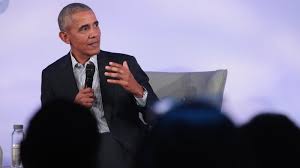 Barack Hussein Obama was born on August 4,1961, in Honolulu,Hawaii,USA.He is an American attorney and politician who served as the 44th President of the United States from 2009 to 2017. A member of the Democratic Party , he was the first African American to be elected to the presidency.
In March 2009, Obama reversed a Bush-era policy that had limited funding of embryonic stem cell research and pledged to develop "strict guidelines" on the research.The Bush and Obama administrations authorized spending and loan guarantees from the Federal Reserve and the Treasury Department. These guarantees totaled about $11.5 trillion, but only $3 trillion was spent by the end of November 2009.Obama called for Congress to pass legislation reforming health care in the United States, a key campaign promise and a top legislative goal. He proposed an expansion of health insurance coverage to cover the uninsured, to cap premium increases, and to allow people to retain their coverage when they leave or change jobs. His proposal was to spend $900 billion over 10 years and include a government insurance plan, also known as the public option, to compete with the corporate insurance sector as a main component to lowering costs and improving the quality of health care.