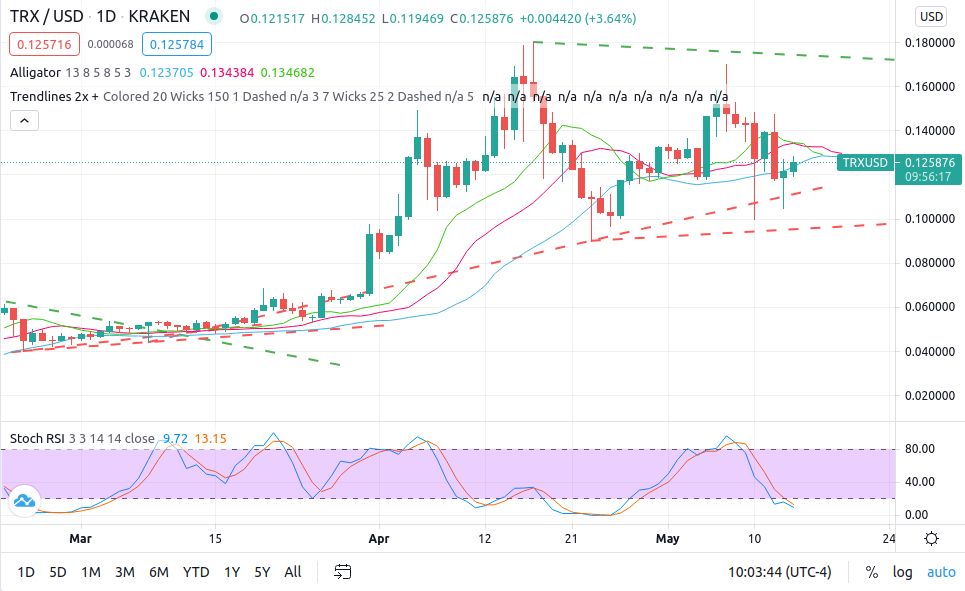 5% of the rewards of this post are for @steem.amal

Generally speaking, from late February to late March, the Tron alligator rose very gently above support trendline at $0.042-0.049. Then, in early April, it suddenly began to hunt for prey and rose rapidly until it stopped at resistance trendline of $0.18-0.17 in mid-April. The alligator then closed its jaws, followed by a significant price correction until it was stuck at the $0.09-0.1 support trendline in late April, and slowly bounced up between the $0.09-$0.095 support and the $0.18 to $0.17 resistance trendlines.

Meanwhile, the Stochastic RSI oscillator has been in oversold territory since yesterday. This shows that the trading price of the Tron is already cheaper than its reasonable price. Therefore, it is not surprising that at any moment investors will be busy buying Tron again, and the price will rise again. And on the lower chart, we can see that the bitcoin price has bounced back up again after falling a few days ago. Meanwhile, based on experience, bitcoin price movements are usually followed by the prices of other altcoins.

At this time, the jaws of the alligator seemed to begin to close. Will it really sleep, or will it go up to eating again? Let's follow the adventures of our Tron alligator.

This post was resteemed by @steemvote and received a 3.45% Upvote. Send 0.5 SBD or STEEM to @steemvote

According To My Vision Trx will Grow Much faster But If it has not grown so far, what could be the reason for it?

You're right.. Tron has strong fundamental..