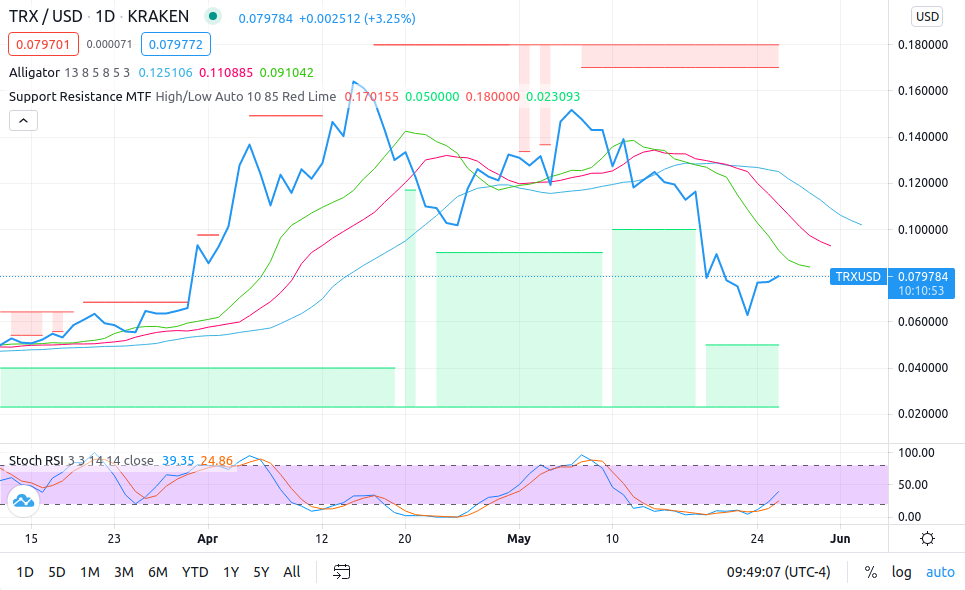 5% of the rewards of this post are for @steem.amal

Meanwhile, the Stochastic RSI oscillator, which has been in oversold territory for more than 10 days, is starting to move toward neutral. This shows that investors, who had been selling a lot, are starting to buy.

On the lower chart, we see that bitcoin, which was in free-fall, has begun to bounce back up. And usually bitcoin price movements will be followed by other altcoin prices.

Now the alligator's mouth is still wide open downward, but it is also beginning to show signs that it is closing. Will the alligator Tron close its mouth and go to sleep? Or will hso:

This post was resteemed by @steemvote and received a 3.7% Upvote. Send 0.5 SBD or STEEM to @steemvote

The user @steembots.info was blacklisted due to his involvement in: Be careful! ---
[How to secure your account](https://goldvoice.club/steem/@cryptokannon/spring-cleaning-steem-acccount-to-avoid-hacker) Report any suspicious behavior on [Steem Sentinels](https://steemsentinels.com/reports) Need help? Reach us on [Discord](https://discord.gg/4vvDGWFjA2)
26.05.2021 14:24
0
#