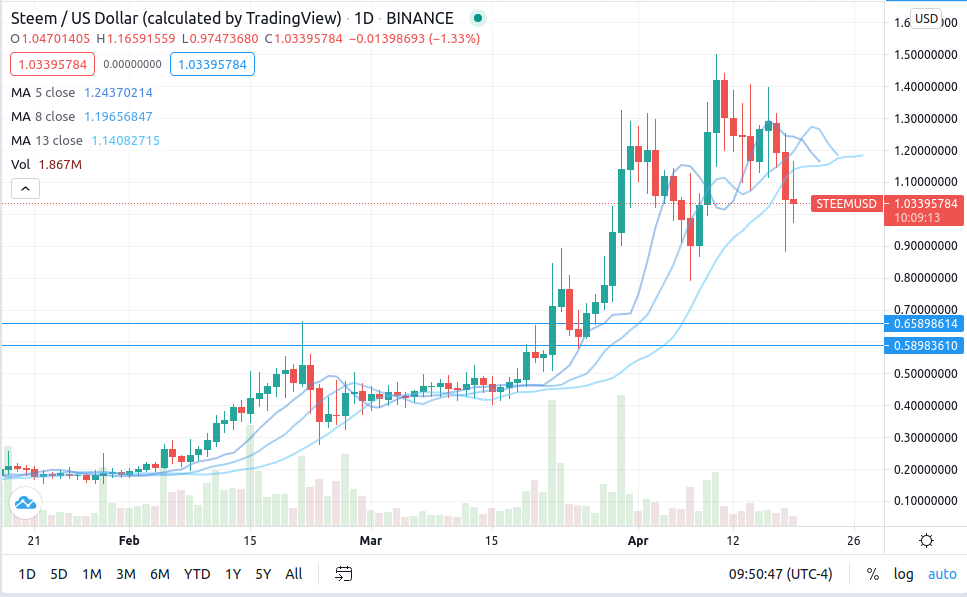 Until early February, the STEEM alligator appeared to be asleep motionless at around $ 0.2. Then he woke up and slowly climbed up for food until he reached around $ 0.5 in late February. Then the alligator went back to sleep between $ 0.4 - $ 0.5 until past mid-March. After that it awoke and rose again rapidly hunting for prey to reach around $ 1.2 in early April. Then the alligator was seen fluctuating erratically between $ 0.9 - $ 1.4 as of today.

Now the alligator's mouth appears to be closing. Is it true that he is full and will soon sleep, or is he still hungry and will continue to hunt further up? Let's follow the STEEM alligator's movements.

My opinion is He will continue to hunting.

Steem is hungry very much just wait and see.

This is temporary, steem will go up very soon

Every crypto went down due to transfer fund of coinbase.

Steem will be $2 in next 2 month. Don't worry @puncakbukit wait for it.

How about you tell us what you think will happen next?

Thanks for the comment. I'm still learning about these things of price movement. Still not sure how to predict the future price.

This post was resteemed by @steemvote and received a 2.31% Upvote. Send 0.5 SBD or STEEM to @steemvote