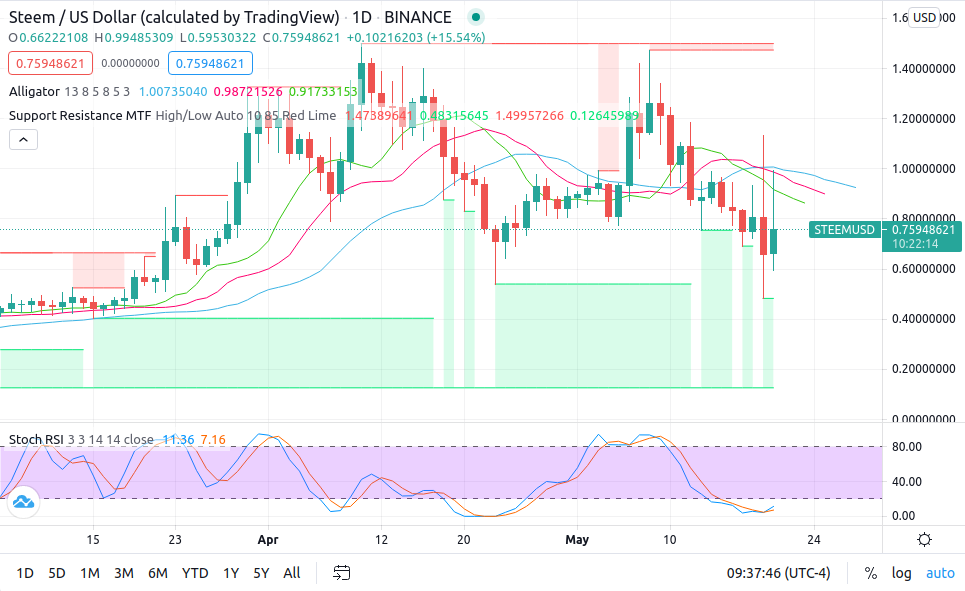 Since March 20, the STEEM alligator has been actively hunting for prey and rising for the month in general, until it finally stopped at $1.5 resistance. Then until May 9, the alligator moved aggressively downward for no apparent reason and stuck at the $0.54 support level.

It then rose briefly until mid-May, and then started moving down again and stuck at thin support at the $0.49 level. This time STEEM fell following bitcoins, which fell due to the announcement by Elon Musk that Tesla would no longer accept bitcoins as a means of payment.

Meanwhile, the Stochastic RSI oscillator has been in oversold territory for several days. This means that the price of the asset is cheaper than it should be. So it is not surprising that at any moment investors start to change direction to buy back this asset, which means that the price will go back up.

However, the strange thing was the movement of the SBD price. Since the middle of May, the price has actually continued to rise and rise. As of today, the price is up to $12.9. Despite the fact that the price of STEEM and all other altcoins is decreasing following Bitcoin. SBD is pumping!!

Today, the alligator jaw looks wide open downward. Will it go back down again? Or will it change direction to go up again according to oversold conditions in the oscillator? Let's follow the odyssey of this STEEM alligator.

This post was resteemed by @steemvote and received a 2.37% Upvote. Send 0.5 SBD or STEEM to @steemvote

Sbd give me a lot of money today.

Frankly, I also surprised to see SBD is pumping while other altcoins are decreasing following Bitcoin.

After that, I did some studies on the SBD concept.

Actually, SBD is one of a cryptocurrency of the Steem blockchain, is considered to be more stable. It is intended to be valued 1:1 with the US dollar, which means that 1 SBD should be equal to the amount of Steem that can be bought with 1 USD.

Due to this concept, lots of cryptocurrency investors were invested in this stable currency. That is why SBD was pumped during this crypto DIP.