[PROXY] @proxy.token disagrees with 0.22.2 soft fork and revoked voting to witnesses who agreed with that. 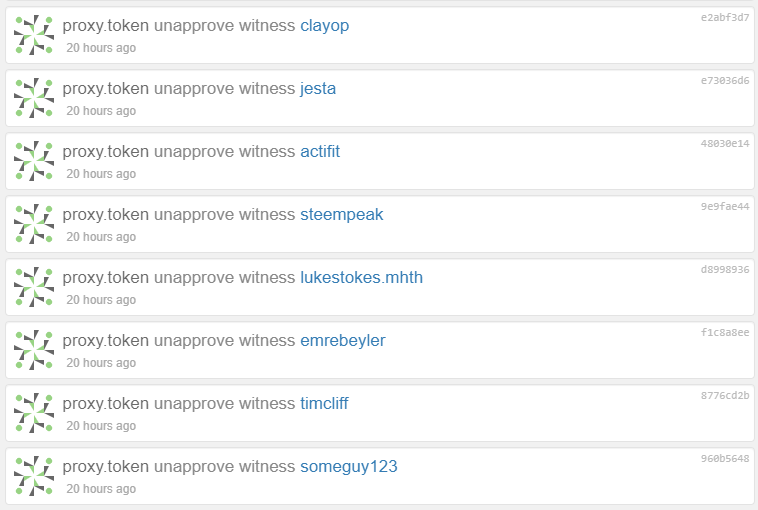 The 0.22.2 soft fork was determined by an internal discussion of STEEM Main Witnesses (https://www.steemcoinpan.com/hive-101145/@clayop/q67bk3), and the @PROXY.TOKEN account was not even given the opportunity to deliver community comments fork.

Therefore, it is deeply regretted that this soft fork was expressed as if the majority of the community had aesses.

@PROXY.TOKEN is the largest single witness voter in the community with 6.6 million STEEM power, and is a preliminary w 60th.

@PROXY.TOKEN has run for main witness to carry out the core value of "Fully reflect the community's opinion on decision-making that determines the direction of STEEM Policy," but considering the STEEM Governance system shown on the 0.22.2 soft fork, @PROXYTOKEN is unlikely to be the main witneeing.

Despite the support and chrs, we've got failed to s, the failure to reflect the opinions of in the keyers ision of STEEM.

Thanks to all supporters.

@proxey.token Can you not vote for witnesses that that do not support 22.2 and possibly get a couple non 22.2 into the top 20?

Smooth supports this hardfork, check who he votes for (people running the softfork), or his comments on the topic.

Sounds like you would have really wanted to be included in the discussions. Is that your main concern and reason for not supporting the softfork?

@timcliff should've kept your witness vote?
He voted no.
And should be in the top 20, IMO.

I definitely understand why you feel this way about the Softfork... (justin rightfully made a purchase and just wanted to be able to use what he bought... the underlying problem remains that the sale never shouldve happened as it wasn’t Neds personal cash) but I can’t seem to understand why you would support the Tron takeover of STEEM and vote these new sock-puppet witnesses... your last paragraph says you will continue to support and develop the steem community... why now are you choosing to help destroy the community?

True. It's one thing to dislike the witnesses move but that doesn't mean one has to support the retaliation that is even worse. Voting for the fake witnesses doesn't reflect: "I disagree with the softfork."
It actually means: "I appreciate the centralization and support this kind of governance."

Centralization is exactly what the witnesses were doing so far, seizing absolutely the entire platform in their favor.

Through donations to all communities of curators and with the control and management of bots, and all projects that were born within Steemit.

Your comment makes no sense. Unless you are blind or part of the beneficiaries of this management methodology, in the hands only and exclusively of a handful of witnesses.

The only reason why witnesses have acted like this. It is because they have seen their own way of acting reflected in what they have done to them. But overnight. Instead, it has taken years for them to absorb and control the entire platform.

Regular witnesses have earned their place through hard work. The new owner has earned the position by putting money. Real money, what can you count?

Neither case, is completely wrong. But, both are incorrect. No one thinks of the true wounded. Never.

The platform itself and the users with less earnings of Steemit. The platform itself and users with less Steemit earnings. Those that are absolutely necessary for this to continue to grow.
Not even the witnesses have thought about them (they only have time to manage projects with benefits, help curators and absorb all the contents of the platform). Nor the new owner: who has failed to convey an attractive message.

In summary. In both cases. They fight for the same. Centralization

The witnesses have been increasingly centralizing the entire platform and all the benefit in them; through other projects, from which they have always benefited.
Giving them everything in their favor.

In the meantime. The few users who do not have great benefits, but who nevertheless trust Steemit; and that despite everything, they have had enough eggs not to go to other platforms.

Some, we have been years. Absolutely tired of having to thank the witnesses and having to constantly lick their asses everywhere. As if they were the saviors of the world within Steemit.

If you have to invent so much game, application and bullshit around Steemit. It is exclusively because one reason: Because the content and the main place of the platform (the blog, share daily) collapsed absolutely and the vast majority of the witnesses turned it into a forum crap about Stem / steemit.

And no, Steemit is not a forum on STEEM or at least that was not the idea.

I am sure that Steemit is perfectly capable of working without any extra.
Steemit has nothing to envy to Medium, dev.to, Blogger or any other Internet content web page.

But for that you need people who want to perform a thorough cleaning and organization of content, management and control.

Because steemit is today, and has been for two years: an absolute whorehouse.

You directly accuse @justinsunsteemit of centralization. When he has the absolute right to do whatever he wants; and you speak of witnesses as if they were heroes; when they have been centralizing every corner of the platform around their damn ass for more than two years.

There is almost no content on the entire platform, no application, no curator, no bots; that the witnesses do not control. And the one that exists, is dead content from the first second in which it is published. Because it is absolutely impossible, to receive money, or to receive visualization, or visits; because all that is controlled by the same people.

And you are in your damn chair. Speaking to the face of users like me. That I've been suffering all the trash they have generated for two years and how Steemit has evolved. Rather, as he has gone to hell.

You are telling me, that in Steemit there is decentralization? Are sure that it?

If you need to lick the brewery owner's ass to enter it. That is not decentralization, or freedom, or anything like that. Seriously.

And if the brewery instead of 1 has 30 or 40 owners. Do you know what happens?
The thing gets more and more fucked. Because the brewery goes from being an open brewery to everyone; and it becomes a brewery for those 40 friends, their colleagues, their family members and their friends' friends (I mean, their bots, their healers, their friends to whom they lend Steem Power. etc.) and finally.

That is the true reflection of what Steemit is today.
A brewery - quite large - of friends (witnees), who have fun with, by and for their friends (application owners, curators who lend them SP, bots ...)

Where are they? I do not see them. Will I have gone blind? Not. It s true. They do not exist.

They have been expelled from here. Steemit should be a platform that attracts users, without any need or knowledge about the world of cryptocurrencies, to be here.

Discover things, publish, spend time. You know.. And it turns out it's the opposite.
A specialized network, with a higher learning line than that of a telecommunications engineering. And you still manage to learn that. It won't do you any good.

The average user: Enter steemit. Create an account. Look around, see the content that exists within Steemit and never re-enter. So. Run. Run far away. He runs so fast, as if he had heard a conversation between aliens.

I guess I share many of your thoughts about how steemit is and how much better it could be. I don't agree with everything around here and I think the governance method is far from perfect.
I just think a "network of 1" is more centralized than a network of 20. I respect your opinion, though. And obviously I also expect this mess comes to an end quickly.

I guess I share many of your thoughts about how steemit is and how much better it could be. I don't agree with everything around here and I think the governance method is far from perfect.
I just think a "network of 1" is more centralized than a network of 20. I respect your opinion, though. And obviously I also expect this mess comes to an end quickly.

I'm glad I can say; that previously, I no longer voted for almost any of those mentioned.

It hurts, the theme of Actifit and Jesta, especially ...