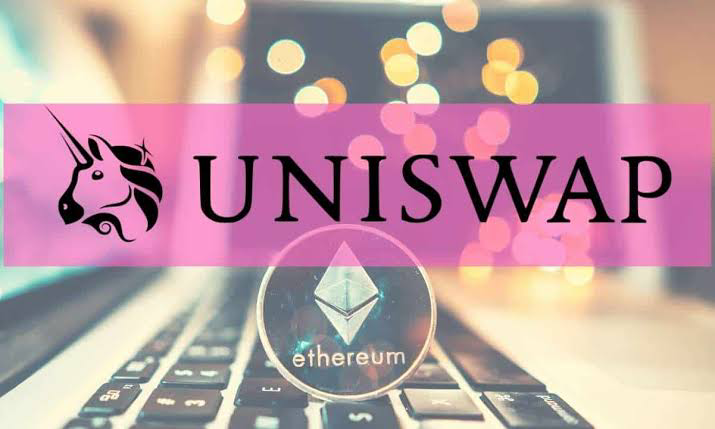 Week 4 is already here. Happy new month to everyone on steemit and to our able Prof. @gbenga, Weldon.

Quite an insightful lecture on Ethereum.

Uniswap happens to be an outstanding project on the Etherum blockchain.

How can we describe Uniswap
Uniswap is simply a decentralized exchange built on the Ethereum blockchain. Meaning that it does not depend on a single entity to be controlled, operated or managed. They are also sets of computer programs built on Etherum network which allows users to swap swap from one coin to another. Usually work by the help of unicorns.

The history of Uniswap began far back in 2016 when Etherum Co-Founder introduced the idea of decentralized automated marker. source

Today it is widely accepted all over the world.
It is decentralized in the sense that users can swap tokens on its platform without the consideration of any third party. It has also been described as the largest decentralized
exchange in the world and the most popular on the Etherum blockchain.

Uniswap plays a vital role in the crypto market today and are responsible for innovations and adoption in the market today. They also allow you exchange ERC token (in a trustles and permissionless manner) which are the most common on the Etherum network and an open source software.
They are mounted on the Etherum blockchain.

It was built to solve some problems facing the crypto market, by reducing the already concentrated centralized crypto market. However, it has also given business access to internal liquidity.

Benefits of using Uniswap
Uniswap coming into the market introduced a very easy to use interface, very basic trading windows, all this and many more gave it great acceptance. Uniswap is:

Censorship - Resistance and more benefits to its credit.

Disadvantages involved in Uniswap
The major disadvantages is the liquidity provide issues, which I believe it's been handled. The reason is that without this liquidity trades cannot be made on Uniswap.

Another is the price discovery, but with the introduction of Uniswap V2, an advanced oracle has been introduced to handle the issue of price discovery. With Uniswap V2 providers can now add new tokens, as it depends solely on smart contract.

A Smart Contract are set of code that runs on the blockchain allowing for the creation of a trustless protocol where the two parties involved do not need to trust themselves but rather the code on the blockchain where if one side does not meet with the terms of the contract, it won't be executed. source

Liquidity and how Uniswap Work
As earlier stated it is built on th Etherum blockchain, an automated liquidity protocol. Uniswap displaces the need of an order book but rather used the Automated Market Marker model (AMM), this allows users to trade smart contract in which they are also able to give liquidity in various pools. However each of this pools are defined by smart contracts which involves functions like swap tokens, adding liquidity, exchange and more.

The added liquidity also helps to solve the problem of high spreads for illiquid assets on order-book exchanges. source

Each of this smart contracts or pair manages a liquidity pool made up of 2 reserves ERC-20 tokens. Provisions are made for anyone to provide liquidity on Uniswap by depositing exact value of each underlying Token in anticipation for pools token. These Liquidity Providers share in the total reserves and can be redeem at anytime.

How are prices determined on Uniswap
Prices of token on Uniswap can be determined by the total amount of each token in the pool.

The formula utilized by the smart contracts is given below :

Take for an example:

For example, Bob wants to trade chainlink (LINK) for ether using the Uniswap LINK/ETH pool. Bob adds a large number of LINK to the pool which increases the ratio of LINK in the pool to ether. Since the value K must remain the same, it means the cost of ether increases while the cost of link in the pool decreases. So the more LINK Bob puts in, the less ether he gets in return because the price of it increases. source

Gas fees and Minning
Projects built on Ethereum Blockchain are experiencing high outrageous fees, this is due to high demand from users. When transactions become too many, block begins to fill up and mines pick the ones with higher gas fees, leaving the others behind, this will cause a queue in the block, too many transactions to handle, however when a transaction is set too low by the user transaction, their transaction will unsuccessful.

Uniswap on the other hand, uses the AMM to formula in matching others which are powered by Smart-contracts. Since it is built on the Ethereum Blockchain, and other project in its like experience high gas fees.

As a way to reduce high gas fees, is to use wrapped Etherum (wEth), when swapping tokens for ETH. This can save gas fees by up to 20%.
Another way to reduce gas fees is to introduce e a minted token, which can be minted when price is low and burnt when price is high, by doing this the exchange can save up to 40% in gas fees, 1inch is currently practicing this. source

The Uniswap (Uni) token
Uni can be described as the governance token for Uniswap, this token are introduced and gives user power to develop the project and vote for more project to be included into the Uniswap platform. It is also an ERC-20 token which is compatible with the Etherum network. It can be used as loan collaterals as well.

How Can I use Uniswap
It has never been easy using Uniswap as long as you have a trust wallet, metamask wallet, Coinbase wallet, etc. On trust wallet , it has been included to the Dapps section, all you need to do is just click on it and you are good to go.

In conclusion, even though the gas fees are really outrageous, Uniswap still remain on top of its game, though this should not be overlooked. There are various means by which gas fees can be reduced, which is the major problem not only on Uniswap but also on other project built on the Ethereum blockchain.