Ind vs SA: This will be the first time in Test cricket after 47 years, when Rohit and Mayank will come on the field 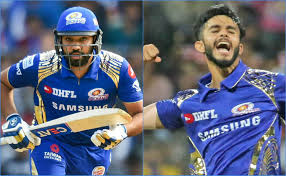 Team India's selectors have already made it clear that Rohit will open in the Test and team coach Ravi Shastri has also said that Rohit, who has been very successful as an opener in ODIs and T20s, will be given full chance in the Test. The reason behind this is that Rohit can prove himself in Test cricket and for the team to be a match winner in Tests as well.

By the way, if all is well, Rohit Sharma will make his debut as an opener in the Test against South Africa and will be supported by Mayank Agarwal. This will be the first time in Test cricket after 47 years when two fresh batsmen will open in a Test match on Indian soil. Mayank Agarwal will play and open his first Test against South Africa in India, while Rohit Sharma will open the innings for the first time on Indian soil.

As far as opening batting is concerned, both these batsmen will open for Team India as a new pair for the first time. It remains to be seen how successful both of them are as a test opener. Anyway, Team India has been looking for a successful opening pair in Test cricket for a long time, which has not been found yet. Will this quest end as both of them or will the previous story be repeated.