An inflation pool that shrinks every year.

Daily Amount of Steem Powered UP & DOWN 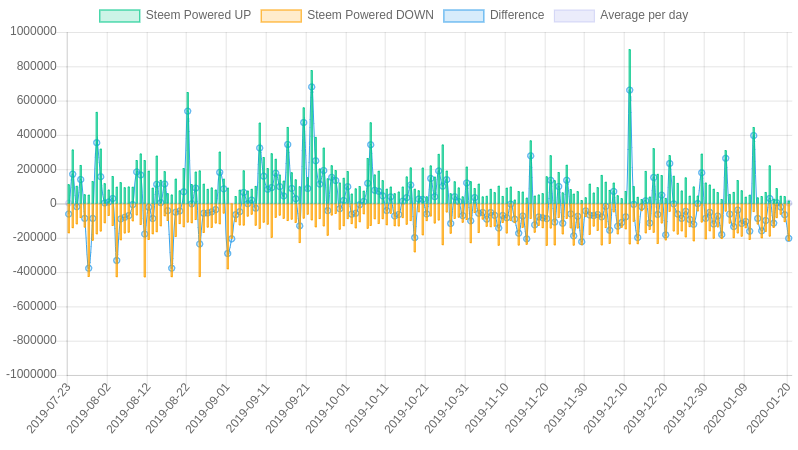 "The instant power down concept, regardless of the cost/burn, destroys the security feature altogether. A hacker won't care about burning 5% or 20% or even 50%. Anyone who is hacked will lose all their funds instantly.
Also, proposing that people invest without powering up is ignoring the cumulative cost of Steem's high inflation." «@smooth»

The way it works is that you accumulate at the bottom. If the price starts going up you sell what you own into the buy wall to push price back down. Yes, you sold a few, but hopefully you're accumulating more than what you were selling and at lower prices. The bigger the bear the more tokens you can shake out of people! They might be screaming in financial pain... but don't their poverty tears taste so good? «@aggroed»

I think an Instant Powerdown should cost 20%, not 5%.
And I'm saying that from someone who would actually use it.
Instant versus 13 weeks can easily double the gains that a person would achieve at the peak of the bull run. «@chrisrice»

Investors vs Speculators vs Scalpers

I have heard the idea of reducing inflation down to 1-2% on Steem - by eliminating the reward pool for Proof of Brain and leaving just inflation for witnesses & Steem Power hodlers. And moving token rewards over to Smart Media Tokens, strictly. «@theycallmedan»
In my opinion the whole powering up/down thing should work a little differently. The idea is that if you want to have control over things on the network like witnesses and the reward pool, you need to make some kind of commitment. So that's really what Steem Power is - it's the commitment to stay invested in Steem for a certain period of time.
The problem is that it's not a fixed period of time, it's 13 weeks from when you start to power down. Instead I think that SP should be able to be powered down instantly as long as it's been powered up for at least 13 weeks.
This way, powering up is committing to stay invested in Steem for 13 weeks, and after that you've met your commitment and can power down instantly. «@yabapmatt»

...said by someone currently living in a country with a hyperinflationary economy.

I feel like I have a good grasp of the issues now...

I did my best effort my friend. :)

Still a bit cryptic but always with my usually didactic humorous style. 😬

I am a fan of your style. Humorous it is!

According to the Bible, Is it sin against God if a law enforcer is forced to take someone's life in the line of duty?

Do you mean Solomon Islander Dollar?

This post earned a total payout of 0.144$ and 0.108$ worth of author reward which was liquified using @likwid. To learn more.