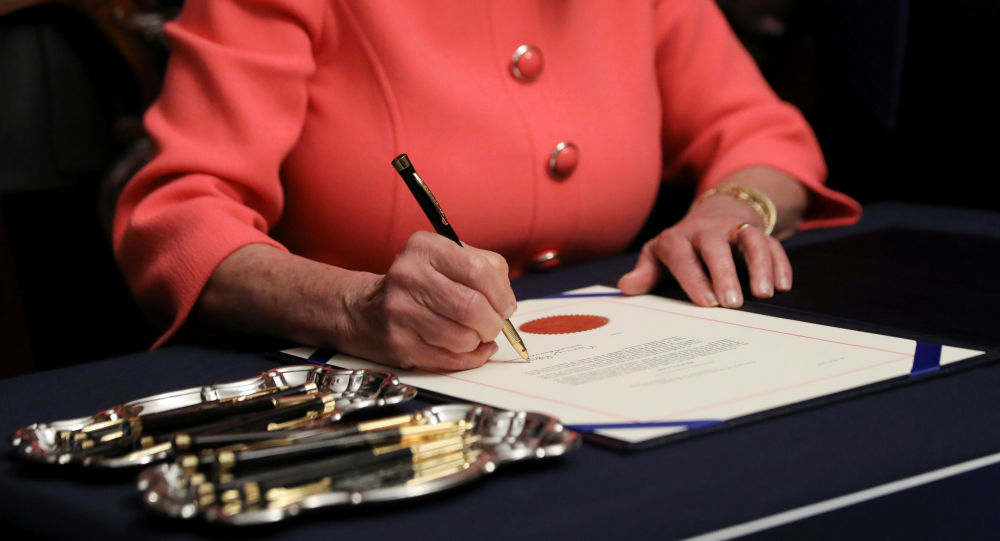 Nancy Pelosi proclaimed that impeachment was sad for our country and a "somber occasion," but she was all smiles and giggles when she signed the impeachment papers with special gold collectible pens emblazoned with her signature.

She tries to keep up the “sad and somber” thing for the cameras, but she was downright giddy as she signed the documents. And this ritual of using each pen to write one letter, and then take the next pen and sign one more letter, just so that each trial manager can have a souvenir like it’s some kind of moon rock, is beyond bizarre. I don’t know if Pelosi ever had any redeeming qualities, but at this point she just looks like a frail and senile crone, desperately grasping at the whisps of respectability slipping through her fingers. I’d feel sorry for her if she weren’t so utterly contemptible.

Far from delivering a solid case with undeniable evidence of bribery which the dems had repeatedly promised (like how they deceitfully promised proof of collusion with Russia for two years also), they impeached the president for something that isn't even remotely illegal anyways on a case fabricated on hearsay testimony from a law-breaking 'whistleblower' and State Department officials with axes to grind. Her case is so flimsy that she herself suggested that the Senate would be engaged in a cover up if they relied only on it.

And the irony of all of this is that the whole impeachment itself isn't just to smear the president with falsehood like they shameless did with Judge Kavanaugh, but also to cover up and deflect from the blatant and admitted corruption of Joe Biden and his cokehead Fredo son's corrupt involvement as a well-paid board member of corrupt company in a field in which he has no experience and in a country he'd never visited.

And if all that wasn't partisan enough, she held her little signing ceremony just as the president was holding a signing ceremony for a monumental trade deal he'd negotiated with China. Plus, she's scheduled delivery of the impeachment articles so that it will blackball the Senators running against Biden for the presidency in her own party in the critical weeks leading up to the crucial Iowa Caucus. I suspect Warren, Sanders, and Klobuchar won't be getting one of those nifty gold commemorative pens. Biden must really have the goods on these dems to get them to carry his water for him.

You're right, Madam Speaker, it IS a sad occasion, but it's much more than that. It's despicable to what depths you've sunk to destroy your opposition.

You honestly think Trump is a sane and stable individual? The man is the laughing stock of the world.

Hey.. I agree with you. But we're really clutching at straws and splitting hairs over who's the worse of two evils. Pelosi think's her side has won by putting the asterisk next to Trump's name but by all measures, this is going to be strung out and the longer it goes for, the more people will see that the dems are just out on a witch hunt.

You currently have a corrupt president who constantly lies and attempts to cover up his insane levels of corruption.

I don’t see how your other option could possibly be any worse than it currently is. Trump as president is terrifying. And I don’t even live in your country.

This isn’t a with hunt. It’s an attempt to remove a highly corrupt and unstable individual from power.