What are Terpenes in CBD? 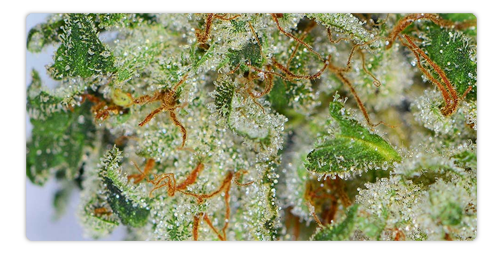 If you’ve been keeping your ear to the ground in the cannabis world, you’ll know the focus has gone off Indica and Sativa with the invent of more hybrid strains, and instead the talk tends to be about terpenes. When it comes to CBD, the story is the same, but what are terpenes, what do they have to do with CBD, and do you have to learn all the complex names for them?

Terpenes are found in all cannabinoids, and effect flavours and smells, for example, the famous earthy weed smell comes from the presence of myrcene, peppery tastes tend come from caryophyllene, and limonene gives a (you guessed it) citrus vibe to scent and taste.

You don’t need to know these names, or the many others that exist due to the fact there is a lot of different terpenes in various strains (humulene, alpha-pinene, beta-pinene, they all tend to end in ‘ene’, except linalool, it’s complex) but it’s important to understand the role terpenes play when it comes to cannabis, and also, perhaps more so when it comes to CBD.

A Headstart for Terpenes in CBD?
In ways, CBD strains are a fair few steps behind cannabis strains, simply because they do not have the years of creation and invention that cannabis strains do.

However, on the flip side, it actually took quite a while for folks to realise the importance of a terpene profile when it comes to cannabis strains, while we are still in the embryonic stages of CBD and we have that information already, giving CBD strains something of a headstart and meaning we can get straight into offering you tasty, fine smelling strains like these.

An Introduction to Terpenes
We may have said you don’t necessarily need to know about terpenes, but we know some of you science heads out there will want to, so allow us to give you a quick introduction to a few of the most common.

Here’s the first thing to know, terpenes are everywhere, while many may only be aware of them due to CBD or THC, they are found in a range of different places. With that said, let’s have a look at some.

Caryophyllene – The hardest one to spell (trust us) this terpene is found in black pepper, cinnamon, and other tasty things with a slight kick, and that’s what you can expect from it, a taste with a kick, and a smell that brings a peppery touch to it. Caryophyllene is interesting, as it’s the only terpene to interact with the receptors in the endocannabinoid system similarly to THC.

Limonene – Limonene has a citrus flavour because that’s where you find it, in the rinds of citrus fruits. If you like your strains fruity in both taste and scent, the chances are you’re very familiar with limonene, even if you don’t know it.

Myrcene – As we mentioned, myrcene is the terpene that gives off that well known earthy, herby smell. This is a terpene that has been suggested to have numerous potential medical benefits, but none that have been scientifically proved.

Pinene – Some of these names make this bit pretty obvious, to be fair. Pinene is found in pine needles, because of course it is, and is known for a (can you guess?) piney scent, the earthier strains tend to be heavier on pinene along with myrcene.

Are Terpenes Important?
Recently, there has been an increasing amount of interest in the Entourage Effect, and a large part of this is due to the presence of terpenes.

The belief that terpenes have health benefits is not new, in fact the likes of limonene and myrcene have a long history of use in traditional folk medicines for things like anti-inflammatory benefits and stress relief.

Now, usage in folk medicine is not the same as being proven to work, and it’s important (legally and morally) for us to make that clear here, we are not stating that terpenes have these benefits, simply that there is a belief in some circles that they may.

Whatever the health benefits may or may not be, what we do know is that the taste and flavour of your favourite CBD strains has a lot to do with the terpene profile.

Have an opinion on terpenes? Why not share it with us below. If you have any more questions, feel free to send us a message, we always love to chat.