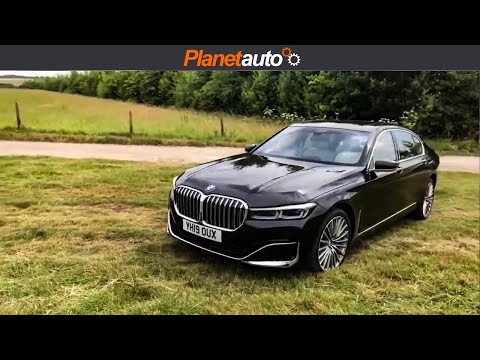 The BMW 745LE plugin hybrid, the model we had had a £10,000 option to start with and that allows you to offer a rather special chauffeur driven experience it essentially removes the middle seat and replaces it with a whole host of tech, more on that later.

Just from looking at the exterior of this car you can tell it's been facelifted. The seven series has always been a luxurious car, however this one has excelled and it has a whole new look.

It's more luxurious than ever, everything is soft touch, everything is premium you even get thicker glass it's got heads up display, lots of safety also a new entertainment system, this is more like a hive mind so it remembers things about your journeys and settings you can even ask it questions.

LEDs as standard with the laser lights like the ones we saw on the i8, it's a lot sleeker and when driving it doesn't feel quite as big as you would expect.

The LED lights are adaptive it has soft close doors 360° camera of those cameras actually can be used as dash cams as well which will record when told to or on a collision.

When it comes to engines and drive trains well you can get a 3L diesel, a 4.4 L V8 and the hybrid we have.

The new LE has a 282 bhp 3L straight six and 111 bhp electric motor and a new high-voltage battery, pure electric range between 32 and 36 and it can can run in EV mode up to 68mph.

Despite the extra cylinders the745LE omits less CO2 as well.

It effortlessly glides along it's a very refined silent experience for a passenger, unless you put your foot down then it's like a rocket, then it's 0-62mph in around 5.1, and it sounds amazing.

It is a big car don't get me wrong however it doesn't feel as big as it could do.

This model retails for around £82,000 and has 600 Nm of torque and has an eight speed automatic gearbox, top speed of 155 limited, and economy 117 mpg utilising the hybrid mode, a great car