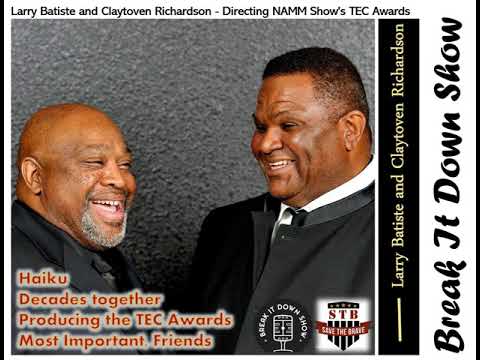 Larry Batiste and Claytoven Richardson - Directing NAMM Show's TEC Awards - Every year NAMM celebrates the people and companies that make or work with the instruments, equipment and software that drive the music industry. The TEC Awards have been recognizing Technical Excellence and Creativity.

Each year the TEC Awards bestow two special honors--They induct a member into their Hall of Fame--this year that was Leslie Ann Jones. They also present the Les Paul Award, 2019's awardee is Peter Frampton.

This celebration is called the TEC Awards and it happens at the NAMM show in Anaheim each year. Jon Leon Guerrero and Pete A Turner attended the show in 2019 and sat down with Larry Batiste and Claytoven Richardson the music directorial team for the awards show.

Larry and Claytoven grew up in Oakland and have been friends for decades. Given the years and chops between these two, you know the band is smokin!