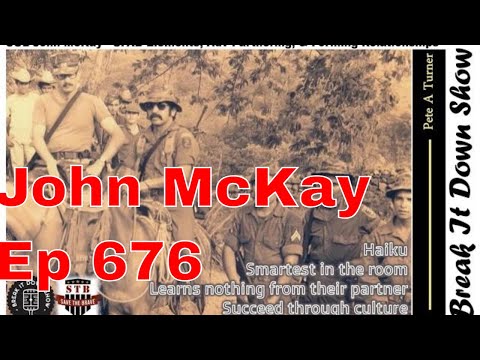 COL John McKay - SFAB Elements, Adv Partnering, & Forming Relationships - US Marine COL John McKay (ret) joins Pete A Turner on the Break It Down Show. As we continue our episodes focused on SFAB/MATA military advisor training, John and Pete talk about the element of "Advanced Partnering." The notes in this episode are valuable outside of the military as well.

The books John recommends in this episode are hard to find--but they are available at breakitdownshow.com in the episode link.
Book Titles--
Sacred Rage by Robin Wright
Doctrina de Acción Contrarevollucinaria

For our episode with Dr. Ledet on SFAB/MATA elements click

John's been a frequent guest and we always recommend that you take the time to review his past episodes. His experiences are going to be chronicled in his upcoming autobiography.

Join us in supporting Save the Brave by making a monthly donation. ​
Executive Producer/Host/Intro: Pete A Turner
Producer: Damjan Gjorgjiev