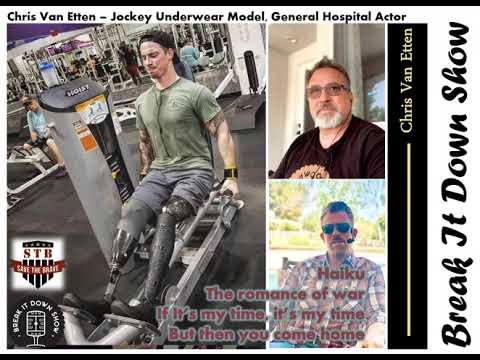 Chris Van Etten – Jockey Underwear Model, General Hospital actor - Chris is a combat veteran, who’s a soap actor on General Hospital, a Jokey underwear model. Beyond Chris’ obvious success, what makes him remarkable is all of this happened subsequent to an IED taking both of his legs in a blast. He also lost his best friend TJ in the explosion. Sprinkle in some survivor’s guilt, a TBI and a healthy dose of impostor's syndrome and we’ve got a hell of a story. Chris’s work on General Hospital is founded in emotional strength forged in combat.

Pete A Turner and Best-Selling author Scott Huesing take Chris to a place only a fellow combat warrior is able. Also sitting in on this episode is Josue Barron while the fellas record at Huesing Ranch. We’re proud of Chris’ tenacity. He’s taken what combat has given, and like the Marine he is, he’s adapted and overcame and come out the other end a better version of himself.