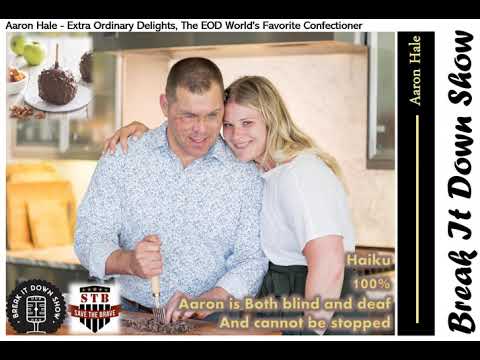 Haiku
100%
Aaron is Both blind and deaf
And cannot be stopped
Aaron Hale - Extra Ordinary Delights, The EOD World's Favorite Confectioner - We continue our feature on severely wounded warriors with Aaron Hale. Aaron had such a cushy job in Italy cooking for a Fleet commander...I mean seriously cushy.

He traveled to half of the Mediterranean countries cooking for his Admiral and dignitaries....but Aaron knew he wanted to do more.

He transitioned to the Army to work in EOD. While deployed he was hit by an IED that took 100% of his eyesight. Once they got Aaron put back together he developed meningitis and lost his hearing as well. Think about that, before he finished learning how to be blind...he was suddenly also deaf. His transformation is incredible...and it's made possible by his rock of a wife McKayla.

We celebrate the Hales today and we ask you to join Scott Huesing and Pete A Turner as they dive-in to this incredible story.