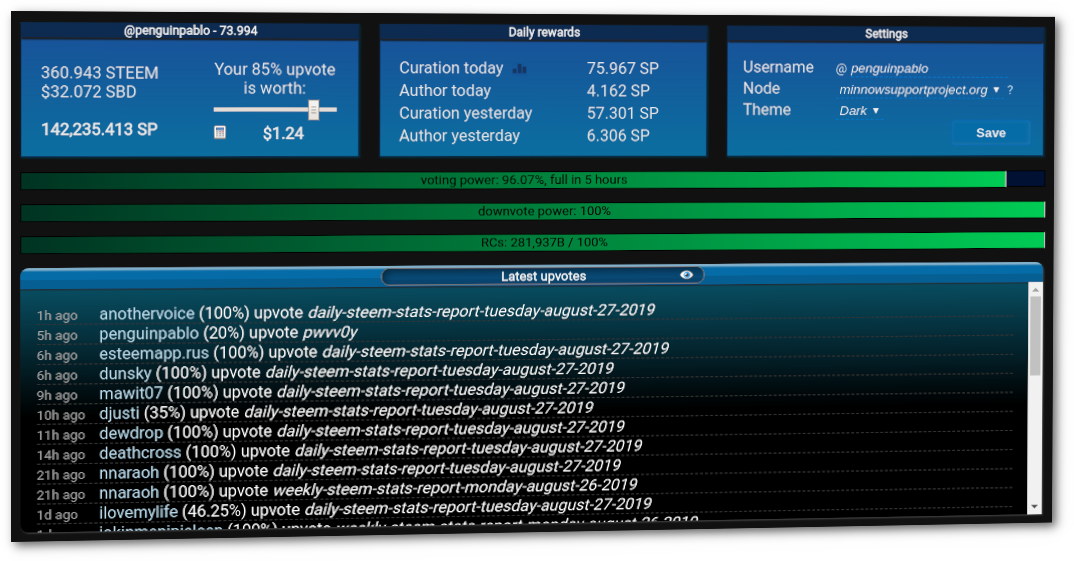 I have been working on some changes on my websites steemnow.com and SteemBlockExplorer.com today.

Both sites are now fully adapted to HF21 :-)

Note: You may need to clear your browser's cache to reload all JavaScript files.

Thanks for this great explanation... I finally get it 😂
On the other hand... I don't think this is a good thing for people voting on comments. When someone leaves a great comment on your post, and you're the only one to upvote it.... chances are you don't even go above the "dust value"... (if you're not a whale)
I think this is the end of comment-voting... 🤔

I am wondering whether to keep voting on comments. I'm better off upvoting a post by that user. Could give the comment 1% to show I see it at least.

I think you're right...
The sad part is that people will not have any incentive to comment anymore, good against spam but... I have some doubs...

Commenting is still good for engagement to build your following. I will be voting up posts by people who comment rather than the comments themselves. I would hope bigger accounts will still vote up comments, but it eats into my voting power too much.

Congratz, your post has been resteemed and, who knows, will maybe appear in the next edition of the #dailyspotlights (Click on my face if you want to know more about me...)
Check the rules of the Daily Spotlights if you want to nominate someone!
Pixresteemer is also listed as promoter on The Steemians Directory
28.08.2019 13:30
1
#

Great! My favorite site is back again.

I hadn't seen https://steemblockexplorer.com/ before, but it looks like a great utility.

Have you considered adding tooltips with definitions to the Blockchain Properties section? For example, I am curious what "total vesting fund steem" and "total vesting shares" mean?

Got it. So to know the total amount of STEEM tokens if all SBD and VESTS were converted to STEEM, we'd do the following?

No, the virtual supply is the total amount of STEEM available including the SBD (if converted to STEEM at the current price) and all vested STEEM.

So the virtual supply is the actual total amount of STEEM.

I was happy to see the downvote display. I use Steemnow all the time to monitor my account. This actually helped me understand better how the downvotes work and I want to be sure I use all mine. There are plenty of accounts milking steem that need dealing with. Good to see some big accounts doing this to improve the platform.

Thanks for the update! Really useful!

Looking at steemnow, my curation reward is higher than my author rewards for the first time (today and yesterday). I never was a high earner, but to me it looks as if the net effect is basically the same as before.

Thank you for your work! I was using your resource daily but only after I've read this post I've managed to get downvotes battery after clearing the cache. Very handy!

Thanks a lot, was waiting for this update - else would have asked! :-)

One really important thing for those of us who use steemnow regularly is to either clear the cache or do a hard refresh to clear the previous script - a hard refresh (Ctrl-F5 on Win PCs) did the trick.

I have tracked these values daily for many months and this new curve is slightly challenging to track valid values. What I have done is set the SP at 1 million so that the upvote value is as close as possible to the linear max. It is then up to users to get used to the experience that their actual vote-worth will be somewhere between 50% to 100% of this max value (tho rarely, if ever 100%!)

One can see this effect in the very formula used, that for low rshares the formula approximates to 0.5 *rshares and (very very slowly) rises.