The Five Laws of Gold 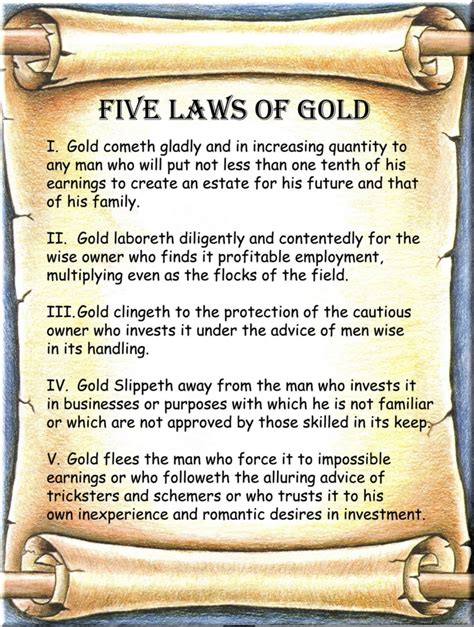 A short time ago, I was reviewing some of the books I have on hand and I found one that was given to me by an Uncle a long time ago. This is a book that, using a storytelling style, presents a series of ideas about money management and how to achieve greater wealth.

I speak of George Clason's book "The Richest Man in Babylon," originally published in 1926 ... That's almost a century has passed!

Well, what I want to highlight is that when I reviewed the book, I found a set of rules that still makes a lot of sense, so much so that it could be taken as "Common Sense", but I know that this is the least frequent of senses.

Rick Ferri, in The Five Laws Of Gold, published on the Forbes Magazine site, cited these laws and gave a simple summary of them in a very concise paragraph:

Here are The Five Laws of Gold, as Clason wrote them:

Save at least ten percent of all you earn. When investing these savings, seek out those who are most knowledgeable and have solid reputations. Don’t invest in things you don’t understand, and when the return seems too high, it should be a signal to walk away. These logical ideas, diligently applied, are the key to saving and growing wealth, and ultimately enjoying the good that it brings.

Also, for people who tend to be more of mind maps, I found an interesting one when I was browsing to find support for this post, it was published by user mannixdeduque on the site Biggerplate: I was thinking that at present, although much of our ways have changed and in particular I am more focused on the development and investment in cryptocurrencies than in traditional investments, well, I have been wondering if these old rules still have in currently a validity that makes them stand out.

I think that if they do, in fact, even with the changes we have had and in the technological advances that we have, I believe that the essence of making and multiplying capital has not changed as much as one might think, but, I would like to know what you think and if after reading these old laws you can consider them as a help or good advice for your own activity.

20% of this Post is intended to support @project.hope - Project #HOPE Community

I love this laws so well... it is often difficult to keep to things that involves delaying gratification but with this law, it could be a easy task.

These personal finance rules require discipline and that is not easy to have. You are right that instant or short-term gratification is very tempting, but if you want to achieve something big, accumulation is required and that can take some time.

You are right.. i will have to start working on this.

Well: Luck, Cheer up and Success!

They are my wishes for you :)

Very interesting reading friend, I think this is very valid today, especially to save at least 10% of what you earn, that advice I have heard and read many times, so I think this has not changed at all.

Things always change, but the essence of things seems to remain quite unchanged, at least without changes that I can notice. That of saving a part of what is earned coincides with not spending more than what is earned, which is also good advice, but by completing it with the other rules, it shows a scenario that not only saves but also invests to grow money

My friend @pedrobrito2004, I can say in all honesty that these five laws are very much in force, I have no doubt about that.

Before, when you could always save 10%, that was what kept me going for a while, but short. After the country's debacle, those savings turned into water and salt-

It is currently very difficult to save, but I must make it clear that this happens in this country.

I hope you keep getting good books like that.

The case of Venezuela is frankly rare, reaching this level of disaster without a declared armed war, without natural catastrophe (earthquake, typhoons, tidal waves, etc.) is something very impressive. I think I remember that a Venezuelan economist who left a while ago commented that there were economic research centers and universities from various parts of the world studying the case, because they were curious how the economy of a country with so many resources could be handled so badly.

I know that today it is too difficult to save, I live that reality, but I try to maintain the optimism that this situation has to improve at some point, by the time that happens, these laws can be helpful.

With inflation, saving money is not convenient. But it's good to invest it. And this medium (crypto world) helps us a lot since you don't need anything special to be able to invest in it. It is practically free, safe and transparent.

We Venezuelans could keep our capital if we invest it in crypto, especially BTC and known altcoins ETH, LTC, DASH and obviously STEEM.

I seem to have read an Arab proverb with the same idea. However, they subdivided even more what one should keep, I do not remember very well but they indicated that 70% will be used for all the things of the day to day, 20% to pay debts and 10% to save. Something like that.

Thanks for sharing my friend :D

Yes, that division you mentioned was also found in the same old book on personal finance, I think that even in one of the initial chapters it makes use of a story of a young man who returned to his homeland after escaping slavery and was given that formula to face your creditors and recover your life and dignity.

Certainly, in a country with hyper-inflation, saving in the traditional way makes no sense, it is best to invest and not keep any of the "weak currency" because every day you spend with it is losing capital.

It is very important to have the habit of saving, it seems to me great everything that fosters the future and encourages economies, more in countries such as Venezuela, where an important role not only plays 10% but everything that is achieved. The one who saves always has! 👍

I still remember the old phrase that said "Saving is the basis of richness", of course it can also be understood as spending less than what is earned and using that surplus to invest and grow it is one of the ways to achieve abundance.

That phrase that "Whoever keeps something always has something" also brings back memories, in certain cases it contrasts with the phrase "Who saves something, keeps regrets", but I think the latter was a warning against the greed that led to they will keep things and resources will not be used even in times of need.

What is dealt with by these laws is to provide guidance for an economic base with which it is possible to achieve a more comfortable life.

Gold flees the man who would force it to impossible earnings or who followeth the alluring advice of tricksters and schemers or who trusts it to his own inexperience and romantic desires in investment.

This always catches up with people who love ladies or try to do money doubling schemes. I have heard about lot of people who lost their money in vegas due to one bet or the other.

It is true that game tables can be a terrible place.