Visiting with the Cambodian Monks 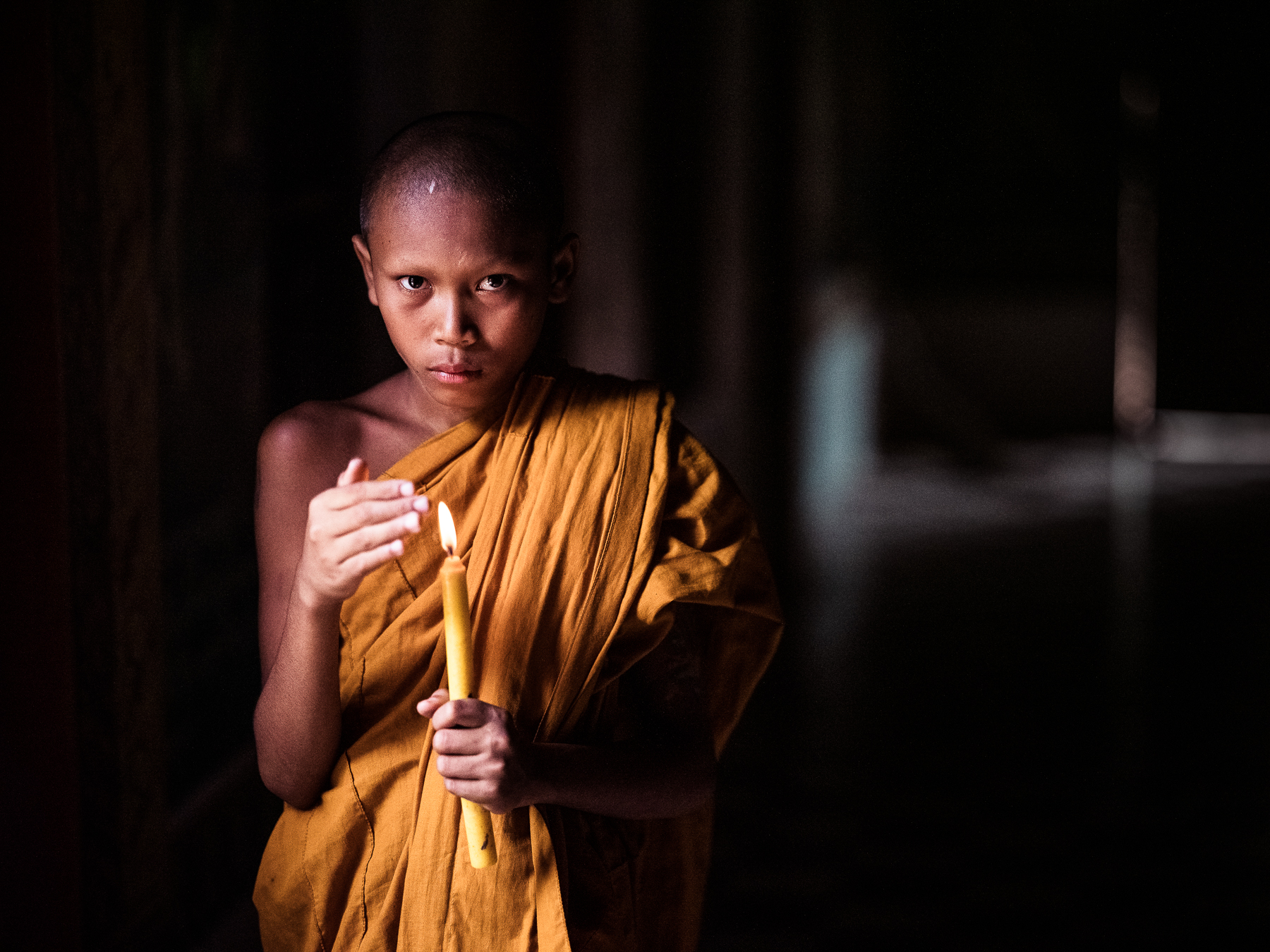 I've travelled through out Asia and the Middle East, I've been invited into Buddhist Temples, Mosques, Cathedrals and Churches, I've visited sacred lands and places of the Australian Aboriginal people and it is always an absolute honour. I try my best to treat their practices with respect and dignity, not to exploit it just for some photos and a story.

During my most recent trip through Cambodia I had the opportunity to spend the day in a monastery, documenting the lives of the monks. A few trips prior our "fixer" / guide / translator had organised a visit to this monastery and it quickly became a regular part of our trips to Cambodia.

While you can totally do a trip to Cambodia without a fixer or even a translator (many people, especially in tourist areas, speak basic English), we find it much easier to navigate some of the local customs with a very knowledgeable guide. Kimleng has been our guide, fixer, translator, photography teacher and friend over the last 6 years we've been running trips through Cambodia. I wouldn't run a tour or even contemplate a visit to Cambodia without seeing Kimleng, he is just that awesome.

Kimleng arranged for us to spend a day with the monks and to document how they live and practice Buddhism. I always find it an incredible privilege to be invited and allowed into the daily lives of people and even more so when it involves their worship and religious practices. There is something special about visiting a sacred place or a place of worship, you don't have to be religious to know that religion runs very deep within the people who practice it.

The daily lives of the monks is actually quite regimented, with over 220 rules that run nearly their every waking moment, from the time they wake to when they can and can't eat through to what they wear and how they present themselves. Most of the young monks have a similar story, their families were unable to afford an education for them so they were sent to live in the monastery and to get an education. The young monks are taught self-discipline and complete their school studies.

We were fortunate enough to be allowed in to photograph the young monks preparing their lunch meal. It was very dark and smokey, which made for some great photos, the young monks also wanted to speak with us to practice their English. The next set of photos are from the meal preparation:

While speaking with the monks I asked if they have many people take their photos, they responded that many people will surround them and take their photos when the monks walk through the town. I asked if this bothered them, they said that most of the time they don't mind, but would prefer people asked and spoke with them, rather than treating them like animals in a zoo.

I often think to myself "how would I want to be treated in this situation" before I even think of taking a photo. Photography and documenting our world and lives is important, but the human connection and treating each other with respect is far more important.

After the meal we headed into the jungle and then up to the temples for some prayer time. They asked if we wanted to go to a place where "the light shines through the jungle" for some photos, I'm not usually one to go for "staged" photos, but decided to follow their lead. We walked from the meal and living areas out into the jungle... now I have to stress this... do not ever do this by yourself in Cambodia, never leave paths to explore jungle or areas you do not know.

Cambodia has the most unexploded land mines in the world and many people have lost limbs or their lives from the land mines. The monks clearly knew where they were going and were very familiar with the area, which has been completely cleared of landmines. I support two non-government organisations that are working to clear the landmines in Cambodia.

As we entered the clearing we saw that they were totally right, the light filtering through the jungle canopy combined with the smoke haze from their meal preparations was awesome. It was a photographer's heaven, the monks were happy to have shared a place that was special to them and could see the joy on our faces at the photos.

The area is littered with ancient temple ruins, but the nice part about this particular monastery is that it is off the beaten path and well outside the usual tourist areas. We asked the monks if we could take some portraits of them amongst the ruins and they were very happy to let us do so.

Late every afternoon the monks finish out their day with time in the temple doing their daily prayers and chants. On nearly every visit to Cambodia I've been invited in to respectfully observe and photograph these rituals.

There are many dos and don'ts that must be observed in order to not cause offence, so I recommend only doing this with a guide or on invite from a monk who will make you aware of what to do. The basics are, don't touch the monks, monks may shake your hand if you are a male, but they are not allowed contact with females, take your shoes off before entering a temple, don't talk and don't move around too much. It is usually good to just sit and observe up the back of the temple, out of the way.

If you are visiting Cambodia, be sure to find a good guide who can take you to places that are a little out of the way, visit with some monks and interact with people. I personally find this much more enjoyable than the "tourist traps" that everyone visits.

I am not a Buddhist, so if I have written some of the details wrong or misinterpreted some of this, I apologise, please understand this was done out of a position of ignorance and wanting to learn, not one of malice.

Hope you enjoyed the story and the photos.

Bang, I did it again... I just resteemed your post!
Check my new contest and the winner of last week.
Pixresteemer is also listed as promoter on The Steemians Directory
25.09.2019 02:15
0
#

Amazing photos! The one of the two monks in the first with the light filtering through is incredible!

Amazing post, I like how you respected every aspect involved in this experience, we all should. All the pictures are beautiful.

Thank you. I just don't want to exploit people, it is a horrible feeling to be used or exploited.

Wow! What a treat. Thank you for sharing your experience and wonderful photos. The light... with the candle and coming through the trees... made for extraordinary pictures.

Thank you Sara, it was a special experience :)

Very good publication, the images are good and shows the spirit of the place, it is appreciated that it is a meeting place with the spiritual and the human, I really liked the photo photography 16 seems deported ... greetings

A very nice article!
Thanks for sharing.

This must have been an incredible experience. These are such great images. Thank you for sharing these with all of us.

It definitely was, it was my third visit with them and I have enjoyed each and every visit.

I love the dim, half light shots... wonderful mood!

these photos are amazing and give us such a wonderful view into the daily life of these monks. Thank you for sharing these with us and for showing your respect towards all people that you have met xx

Thank you. Respect costs nothing to give :)

Hiya, @itchyfeetdonica here, just swinging by to let you know that this post made into our Top 3 in Daily Travel Digest #634.

I noticed your second photo was at Angkor Wat Temple. Are you still in Siem Reap?
My wife @mumma-monza and I live in Siem Reap, we have been here for just over 7 years now. If you're still in town, you should pop into Picasso Bar tonight and have a cocktail. 😉

I'm home in Australia now. I was last there in March / April. Should be back some time next year.

You may recognise some of the pagoda photos, they are actually from Wat Bo, I can't remember the name of the main monastery that we visited though. I'll get in touch with Kimleng and let you know.

Haha, well you can join us next time. I take a team there every year or two.

I was already in Cambodia and loved it. But I was never so near the monks...

If you are in Siem Reap have a look at Wat Bo, it is amazing.

If you are in Siem
Reap have a look at Wat Bo,
It is amazing.

In Siem Reap we had one of the best new-years-party we ever had!