Happy Moan Day Watford, This Is A Great Humiliation 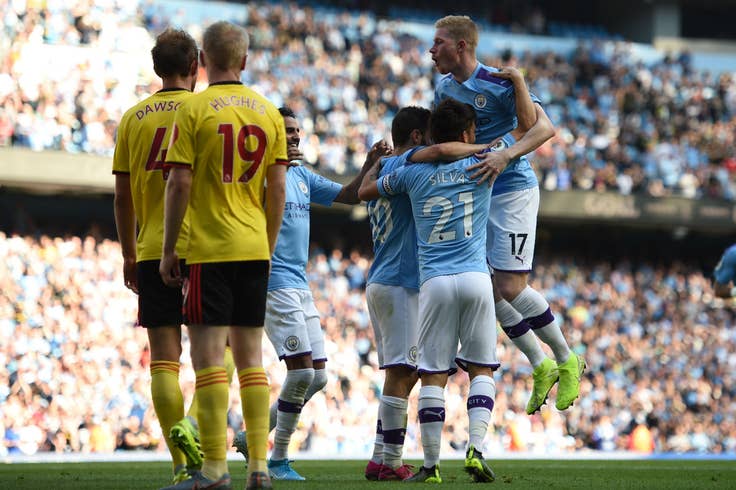 I don't think there is any other team that deserves to be encouraged last week aside from Watford, both the manager and the players needs to be encouraged because it wasn't a good weekend and match to always think about, Manchester City failed to show any respect in that game as they went on to score 5 goals in just 19 minutes of the game and seal the match with an 8-0 humiliation.

Watford since the league begins have not been doing well and that has made the club to became the first club to change their manager after just four league matches and that again has placed them comfortably on the relegation zone occupying the number 20th position on the log. The club sacked Garcia and replaced him with Flores who has once managed the club before in a bid to make some revolution in the club. Flores after becoming the new manager faced his first test against Arsenal and was a little bit lucky to come back from a 2 goals down to level the scoreline.

Manchester City on the other side was shocked against Norwich and really needs to get back on track for the title race. Flores this time around was so unlucky to face the wounded team in the match day 6 and would have wish he is yet to receive the job before Watford face Manchester City because the result was a great humiliation to his career as a manager. After playing a 2-2 draw with Arsenal from a 2 goals down, everybody believes Flores is fast making impact at the club but the visit to the Eithad Stadium was the major test.

Not too long into the game, David Silva opened the scoring in just 52 seconds of the game from Kevin De Bruyne curling pass before Aguero double the lead from the spot after Mahrez was fouled by Ben Foster. Watford really had a busy day in the defense line. Mahrez made it 3 goals lead from a free kick after his shot was deflected in by Cleverly. City continues to show great intense in the game despite leading the game with a 3 goals and never allow Watford to offer anything special. Kevin De Bruyne delivered another beautiful corner kick into the Watford box which was flicked in by Otamendi and Bernardo Silva was there to make it 4. Watford would just wish De Bruyne was not selected for the game because he was so instrumental for Manchester city upfront. Otamendi made it 5 before the 18 minutes of the first half and that was where the citizen stopped before the half break. Flores couldn't hide his anger and needed his team to be more focus in the game but the deal has been done already.

Pep Guardiola made some changes to his line up before the game and Sterling was not selected for the show, Watford was really fortunate the citizens were unable to repeat their last meeting scoreline before the half time. It was a 6-0 scoreline when both teams met last in the FA cup final last season. The second half begins and it was Manchester City that dominating the game again, Bernardo made it 6 from Silva pass to complete his brace and few minutes later the Portuguese completed his hat trick from De Bruyne efforts again and finally, the Belgium star added his name to the score sheet to make it 8-0 and it was really a day to remember at Eithad Stadium.

My Word For Watford

At the end of the day, you are solely responsible for your success and your failure. And the sooner you realize that, you accept that and you integrate that into your work ethic, you will start being successful. As long as you blame others for the reason you aren't where you want to be, you will always be a failure.

It is never too late as the league is just in it's 7 weeks out of 38 matches, the team can still come together and make things right.

I hope you find this post interesting and educating, until then, i remain my humble self @Oxygen02. The guy who support life with his writeups. Thanks for reading