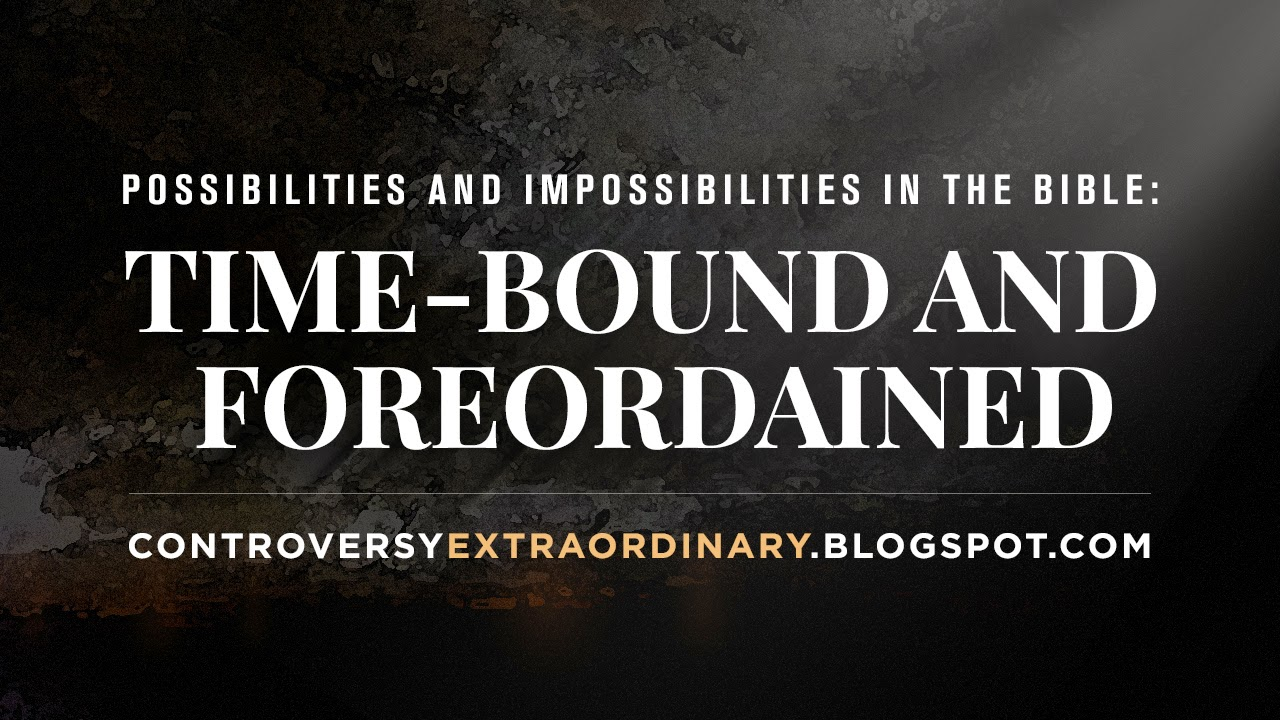 Our awareness on things that exist teaches us two definite things: possibilities and impossibilities. Possibilities are positive. They make us think, prepare, work, and plan on expected eventualities. Impossibilities, on the other hand, are negative. They erase expectations, make us decide definitely, and worse, sometimes make us not to think anymore and dismiss everything associated with known impossibilities.

The Holy Bible, as a book written many millennia before our time, is a book that teaches us possibilities and impossibilities. A reckless reader may at once judge ignorantly that the Bible is unscientific, full of errors, fictitious, and unacceptable to the scientific mind!

There are things written in the Bible that at first glance may appear to be non-sense to one but intriguing to others. Having an evening and morning on “the first day” of creation, for example, while the sun and the moon were yet to be made on the fourth day is very easily dismissed by the enemies of the Bible as something stupid and unscientific!

3 And God said, Let there be light: and there was light.

4 And God saw the light, that it was good: and God divided the light from the darkness.

5 And God called the light Day, and the darkness he called Night. And the evening and the morning were the first day.

In the aforementioned verses, there isn’t any problem, but on Verse 14 of the same chapter, the Bible says –

14 And God said, Let there be lights in the firmament of the heaven to divide the day from the night; and let them be for signs, and for seasons, and for days, and years:

15 And let them be for lights in the firmament of the heaven to give light upon the earth: and it was so.

17 And God set them in the firmament of the heaven to give light upon the earth,

18 And to rule over the day and over the night, and to divide the light from the darkness: and God saw that it was good.

19 And the evening and the morning were the fourth day.

The common question that comes from common understanding of people reading these verses is this: How can there be an evening and morning on the first day when the sun and the moon were made only on the fourth day?

And thus, a prejudicial judgment is rendered upon the one and only book on this planet that describes the origin of its existence and the teeming multitude of life in it!

Some possibilities recorded in the Bible include -

• The appearing of dry land from a globe of waters.

• The appearance of light from utter darkness.

• The existence of vegetation in the absence of the sun.

• The putting of lights in the firmament to light upon the earth on the fourth day of creation.

• The earth bringing forth vegetation and animal life.

• The waters bringing forth aquatic life and fowls of the air.

• The creation of man from the dust of the earth.

• Man living an age for almost a thousand like Methuselah.

• Producing a living being with the same materials from the host.

• Grafting a branch of a plant with the same species, and many more…

Meanwhile, some impossibilities are –

• To produce humans from animals.

• To produce another specie from a given one.

• For the universe to be ever expanding.

• For the universe to start from a bang.

• For the light to have communion with darkness.

• For the universe not to be in perfect order.

All of these are time-bound and foreordained. In the first, it means things came to be on account of time. In the second, it means someone decreed them to be so – and unalterably so. Let us go to judging - as it is connected to judging the Bible, or judging truth.

A very famous judgment rendered in the Bible is when Solomon commanded that a child be cut into halves when two supposed mothers were claiming the same child.

16 Then came there two women, that were harlots, unto the king, and stood before him.

17 And the one woman said, O my lord, I and this woman dwell in one house; and I was delivered of a child with her in the house.

18 And it came to pass the third day after that I was delivered, that this woman was delivered also: and we were together; there was no stranger with us in the house, save we two in the house.

19 And this woman's child died in the night; because she overlaid it.

20 And she arose at midnight, and took my son from beside me, while thine handmaid slept, and laid it in her bosom, and laid her dead child in my bosom.

24 And the king said, Bring me a sword. And they brought a sword before the king.

26 Then spoke the woman whose the living child was unto the king, for her bowels yearned upon her son, and she said, O my lord, give her the living child, and in no wise slay it. But the other said, Let it be neither mine nor thine, but divide it.

27 Then the king answered and said, Give her the living child, and in no wise slay it: she is the mother thereof.

Considering the period wherein they lived, the impossibilities were: 1) DNA test; it was not possible. 2) CCTV cameras to review who really overlaid the child; they did not exist before; 3) Witnesses to the incident; no one saw the culprit; and 4) Two mothers: the child can only belong to one.

But the wise king harnessed maternal instincts to know the truth and to render absolute judgment. In the absence of evidence and witnesses, the king utilized the God-given instinct of a mother to her own flesh: she would not have her child be sawn in half.

Let us journey back in time and consider past possibilities and impossibilities, as well as consider future possibilities and probabilities after which we can conclude if really the Bible is fictitious, a fairy tale, a book written by stupid people, or the most exact scientific book of all times. Here is the assurance of the God of the Bible who cannot lie.

10 Declaring the end from the beginning, and from ancient times the things that are not yet done, saying, My counsel shall stand, and I will do all my pleasure:

In hope of eternal life, which God, that cannot lie, promised before the world began;

That by two immutable things, in which it was impossible for God to lie, we might have a strong consolation, who have fled for refuge to lay hold upon the hope set before us:

Disclaimer: Any rewards we receive for posting on Steem blockchain are also being distributed for people in economic needs. We are rewarding people who dedicate some of their time and effort to comment in our topic explained by brother eli soriano.

My name is Jesus Christ and I do not condone this spamming in my name. Your spam is really fucking annoying @hiroyamagishi aka @overall-servant aka @olaf123 and your spam-bot army. You spam everybody, we ask you to stop, you refuse to, We downvote you, you downvote us. This is not what I created the universe for. You must stop spamming immediately or I will make sure that you go to hell.

If anybody wants to support my eternal battling of these relentless religion spammers, please consider upvoting this comment or delegating to @the-real-jesus