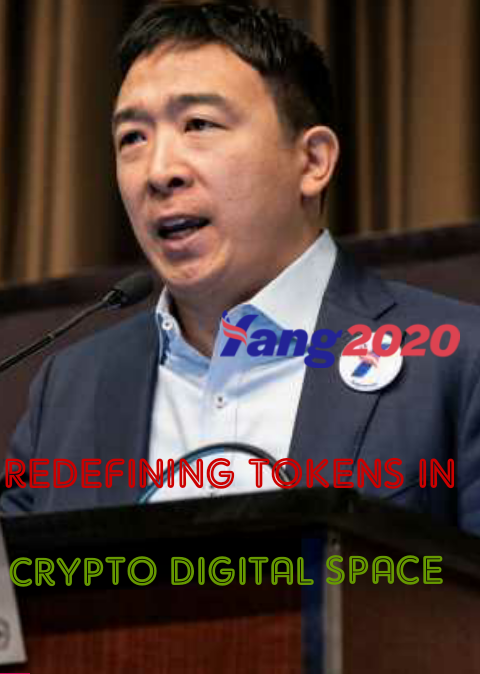 Hi guys!, we are still reminded to join this campaign for mass adoption of Steem Blockchain through the #Twitter Movement and with the Tags which are now trending on Steem; @yanggang, @letyangspeak and @andrewyang. Don't forget to give recognition to @theycallmedan and @ocdb who have motivating us with upvotes and giving us this initiative and other ones like "World Unrest."

Today, I am seeing Yang as "Redefining Tokens in Crypto Digital Asset as Subjected to Regulations." To Yang, Tokens must be viewed in more broader or wider sense than what we see today. I see Yang wanting us to get much impart interns of promoting Tokens and how they are operated in Crypto Digital Space. For we who are Cryptocurrency arena I believe "Tokens" is a common term used to represent all forms coins being Bitcoin, Altcoin, Ethereum, Steem, Litecoin, Dogecoin, EURs and many coins that we know. It can be described as synonym to "Cryptocurrency" these mentioned coins are segments of Cryptocurrency. To others Tokens are seen as Computer Security which are operated as software in internet applications. Yang as an interpreneur who have studied the Crypto Digital space has seen so many lapses which going on in this Tokenized Crypto Digital Asset, the need to redefine it with "regulations" to make it well function.

Yang defines what a token is as "security" In more broader sense tokens are owned by individuals as functionality. They possess the tokens and full access, and it must be flexible to use. Because of this, we have get enough freedom of controlling it but that does not guarantee us to abuse its usage. Yang made mentioned " Federal Agencies" for who will have power to the digital assets. This is to say having departments or bodies having rules and regulations about the operations of Crypto digital assets. On like Steem that we "Steem Cleaners" checking the abuse of blockchaing of spamming and plagiarizing one's work on all that. But, I think Yang's one is going to be well monitored, unlike steem where it got to a time that due to over power of few individuals bested with "Steem Power" well running not for their personal gains. With every Blockchain user is going to experience a fair share of what he/she deserves. Yang also mentioned provision of consumer protection to Tokenized users. O believe this will everybody from being hacked by fraudulent people and free ones from loss of money and a whole lots of account loss and unable to access ones data.

"Yang summarizes everything in this passage:"
"As president, I will…promote legislation that provides clarity in the cryptocurrency/digital asset market space by: defining what a token is, and when it is a security (e.g., recognizing “utility tokens”)….Define which federal agencies have regulatory power over the crypto/digital assets space….Provide for consumer protections in the space….Clarify the tax implications of owning, selling, and trading digital assets….Promote the nationwide adoption of recognition of protections afforded by a series LLC….[and] Preempt state regulations when possible to create one national framework.”Andrew Yang- Clear Guidelines To Crypto

I hope, in this definition of Tokens and its regulatoty structures that Yang tries to explain in his summary, to me is a clear evidence of he what he intend to do for the entire technology industry. Let's just put aside this Presidential polls, a face the really as it is. Even along his campaign statement, he mentioned what want his intention on Crypto functions whether or not he wins Democratic Presidential slot. Join the @yanggang team to move Steem forward.