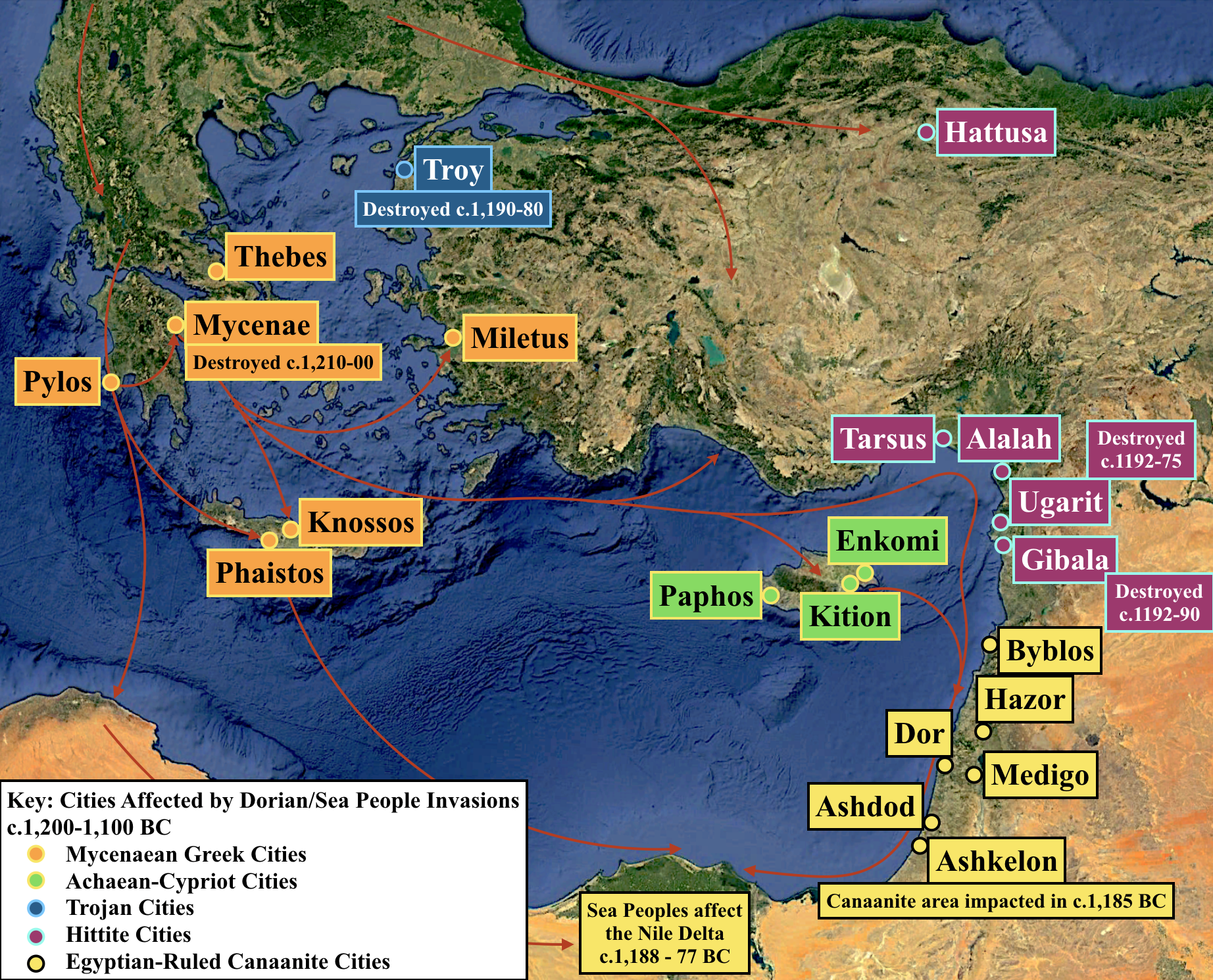 For about 50 years, in around 1,200 BC, the major palace centres of Mycenaean culture were burnt to the ground, with the major remnants of the civilization following suit in 1,150 BC. The palace economy was wiped out of existence, politically and militarily, and those skilled in fine arts and writing seem to have disappeared too. This, followed by mass migrations of Mycenaeans to outlying Mediterranean lands like Cyprus, is what is theorised to have led to the Dark Ages, lasting for around 300 years in total. The Greeks of the later Archaic Period knew practically nothing of the Dark Ages, and thus of the heroes and times of the Mycenaeans.

RESULTS OF THE DARK AGE
The general trend of the Dark Ages across Greece is as follows: the art of writing is lost, settlements begin to disappear from the map while those that live on shrink in size and population, and become more isolated. The booming prosperity of cities vanishes, replaced with, perhaps, more mobile populations, and a heavier reliance on pastoralism likely emerged. A vast proportion of what is ‘known’ of the Dark Ages is based on theories and isn’t finalised, but from such a supposedly Dark time over three-thousand years ago, there’s plenty we do know.

CAUSES OF THE DARK AGE
The likely causes of the Dark Ages are attributed to a handful of theories, the first being natural disasters; Around 1,200 BC, there is evidence of widespread fires across the Peloponnese and Thessaly, affecting cities such as Midea, Mycenae, Pylos, Tiryns and Iolcus. There is also evidence of devastating earthquakes near the Isthmus of Corinth, affecting cities like Athens and Thebes, with Mycenae and Tiryns also being affected by these earthquakes.

KNOWN HISTORY OF THE DARK AGE
Reconstructing the Dark Ages can be done in different ways; While legends should be treated carefully, and not as definitive proof of something happening, as many were written to fit personal agendas, there are two events which are written in legend that are of importance to historians:

• THE DORIANS - The Dorians were Greeks, yet they were easy to tell from other Greeks through their dialect and social customs, like how each Dorian state was always divided up into 3 tribes, each with the same names; there are several Doric institutions that can be seen in widely separate Dorian communities, like Argos, Crete and Sparta. While unknown to Homeric writers, the Dorians went on to occupy much of the Mycenaeans homeland in the Peloponnese, ruling over a larger non-Dorian serf/slave population. Legend points to the origins of the Dorians in the Peloponnese from Crete as sons of Herakles, who had supposedly been exiled from Mycenae, returning later to Mycenae with his followers to reclaim his inheritance.

The Spartans used this myth to explain their origin too, detailing that the great-great-great grandsons and followers of Herakles, the twins Procles and Eurysthenes, were the supposed founders of the two royal households of Sparta: the Agiad and Eurypontid dynasties. Even if the Heraklid Myth isn’t true, the Spartans would later use this myth to dictate that they were not native Greeks like their neighbours, so according to their own theory, every other state around them was a potential enemy of Sparta. To keep their lineage pure Spartan therefore, the Spartans became an oligarchy - monarchic rule through bloodlines - and the dual kingship made Sparta a dyarchy. Supposedly, the famous Spartan king Leonidas could trace his lineage back to Hyllus, the son of Herakles.

• GREEK EXPANSE TO ASIA: THE IONIANS - Athens appears to be the home city for the Ionian expanse, where groups of refugees passed through the city while attempting to find a new home. Distributions of Greek dialects across the Aegean do seem to confirm the legends around this early migration period. Ionic Greek was spoken in Attica, Euboea, the Cyclades Islands and the Ionic lands of Asia Minor. Alongside Doric Greek being spoken in the Peloponnese, Crete, Rhodes and south-west Asia Minor, Aeolic/Lesbian (as in from Lesbos) being spoken in Thessaly and Boeotia, and Archado-Cypriot being spoken in Arcadia (central Peloponnese) and Cyprus, this linguistic division across the Aegean relates in part to the Dark Age migration legends, with Archado-Cypriot being the closest to Mycenaean, which could be evidence of the Mycenaean culture surviving in part as an enclave in a remote land.

• ARCHAEOLOGY - It still isn’t clear to us today whether or not the Mycenaeans or the Trojans fell first, and in spite of the Homeric epic of the Iliad, it remains unclear as to who or what exactly caused the end of both cultures. The abandonment of large burial tombs in favour of individual burial tombs does point towards is the only major change that can be detected around the Mycenaean world, possibly pointing towards a mass-grave event, linking to the Dorian invasion of Greece. This late Mycenaean period, known as the sub-Mycenaean, has very little physical evidence to show for itself, pointing towards a mass depopulation of the area. A hundred years following Mycenaean collapse, contacts between Athens and Cyprus brought to the island the technological advance of iron smelting from around 1,050 BC, slowly replacing bronze as the most widely used every day metal. At this time, Proto-Geometric pottery also begun to emerge. This was decorated with broad bands of light and dark, and geometric patterns.

(Notable sites on the Isle of Euboea)

The other site which has the most evidence about itself from the Dark Age is Lefkandi, on the west coast of the isle of Euboea. Lefkandi is the modern name for the settlement that flourished on the south-west coast of Euboea. The ancient name remains a dispute. First settled in around 2,000 BC, the settlement was rebuilt around 1,200 BC following a potential disaster that struck the city. It reached its peak of prosperity during the late 10th century BC, possibly attributed to Lefkandi’s likely trade routes with cities in Asia, or perhaps simply due to Euboea’s isolation as an island. This trade network covered Attica, Thessaly, the Near East and Egypt. The city’s decline is noted with the abandonment of its cemeteries in around 850 BC, with the city being fully abandoned by 700 BC, right in the middle of Greece’s Archaic Age.

The settlement sat atop a promontory, where a trial pit of 8.5 metres in depth leading to bedrock has given us today an inexhaustible number of artefacts from Mycenaean times through to the Dark Age, around 2,000 to 825 BC. Large cemeteries at the site during this time showcase that the city, and maybe the entire island itself, somewhat prospered during Greece’s dark times. Discovered in 1980, and accidentally half destroyed by a bulldozer upon excavation of the site, an intriguing discovery at Lefkandi, dated to around 950 BC, is a building measuring 47 by 10 metres, complete with a porch. Known as an Apsidal building, the structure had a series of complicated internal walls and an external wooden colonnade. Its clay floor was laid out on top of levelled rock, its mud-brick walls (coated internally with plaster) stood on a base of rough stone, and its roof was thatched. The structure is thought to clearly be a public building, perhaps of religious significance, but isn’t a chiefs house or a temple. At the centre of the buildings main room, two pits were dug out at the same time during the buildings construction. The first of these pits contained the skeletons of four horses, and the second pit contained two burials, one of which was a cremation - a bronze amphora with decorated scenes of hunting on its rim contained the ashes of a person, and closed on top with a bronze bowl. Next to the amphora was an iron spearhead, sword and whetstone belonging to the cremated individual. The second burial in this pit was a woman, lain out with crossed hands and feet. She had gilt hair coils near to her head - next to which lay an ivory-hilted iron knife, - a golden pendant by her neck as well as a gold necklace with faience beads. Her chest was covered up with discs of gold joined by a golden plaque, and decorated pins lay beside her.

(Plan of the Apsidal Building in the Toumba cemetery, c.950 BC)

While, normally, a building alike to this would have been made to last and be used, the roof of this one was smashed and the entrance was shut off upon the buildings construction, with the entire structure being filled with rubble straight after.

Lefkandi is an anomaly however, as it flourished during a time when the rest of the Greek world did not. While the destruction of many sites across Greece could be attributed to the theorised Dorian invasion, changing burial customs from tombs to graves isn’t always evidence for a changing population; some archaeologists point to the site being destroyed by later peoples, namely the Vikings or even just a local uprising. Despite this, the general impression of this time is that old Mycenaean settlements were being abandoned for new ones and being left as tombs, as new peoples populated the area, and if any legends of the time are true, then it is likely that the Dorians took advantage of the empty world left behind.

SOURCES
• Early Greece, Second Edition, by Oswyn Murray, chapters I - II
• Greek History: War, Society and Change in the Archaic Age (CL1GH) lectures, by Professor Emma Aston, University of Reading
• Sparta and Lakonia: A Regional History 1300 - 362 BC, by Paul Cartledge, page 90
• Herodotus' Histories, 7.204
• A.H. Clough, 1870, page 113
(All images used are royalty-free, or have been created by myself)

😂 .. I am quite sure he knows this one already mister rrobot 😜 .. I would recomment all the great posts 👍