Twitter: The Business Idea that Caused Separation between Friends. 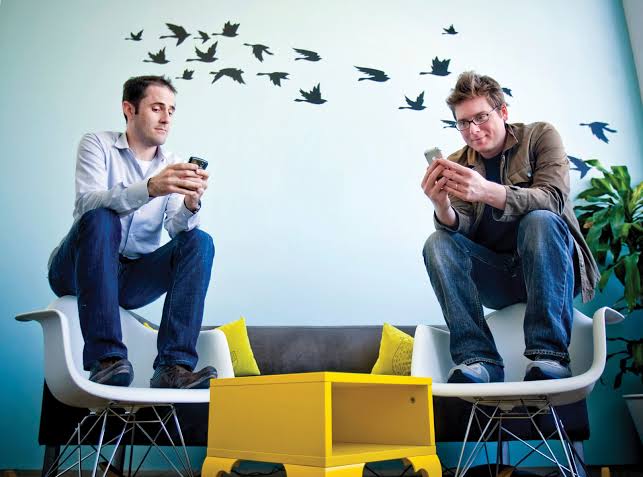 A good number of us have a twitter account and twitter has been rising very fast since it started being a place for both the high classed and middle classed to share their opinion and even turning to a centre of news and publication, but how many of us know the story of twitter, how many of us know how twitter started?

During the early days of the internet, different smart individuals were coming up with ideas on how to become a voice on the internet and that was when Noah Glass started a voice messaging idea that will be hosted on the internet, he started a company with this idea and he named the company ODEO, the first investor in Noah’s business idea was Noah’s friend and neighbour Evan Williams who just sold his company to Google at that time and he had cash to put into good use.

This idea grew into a company that employed a lot of people and moved its idea from voice messaging to a podcasting service, the company was growing very well until apple introduced a new gadget (iPod) that will come with a podcast service and this only translated to be that with an apple iPod there will be no need for a podcast service, ODEO at that time had Evan Williams as its CEO and instead of closing down the company, he threw it out to the employees to come up with a new idea for the company which mad the employees begin to think of different projects as a new direction for the company.

It was during the period of looking for a new idea for ODEO, that Noah became very close to one of the employee named Jack, Jack who was known to be a rather reserved person had a completely different idea for the team. After some years, Noah and Jack came up with an idea where anyone can send a text message to a chosen number (4001) and the message will in turn be broadcasted to everyone added as a friend to the sender, the person who is sending the message can also decide to add more friends by using the same mobile number and they called the name twitter, by 2006.

The twitter idea was basically used for a social network between friends until a major earthquake happened and the news spread fast through twitter, it was then that the team realized how much the idea had been misused and they quickly focused twitter to serve as an information platform and not a social media platform but even with this, the investors did not believe it was something to hold up too and later that year Evan Williams was able to successfully convince investors to re-consider their investment and sell back their shares to him which they did and this made him the single owner of ODEO and TWITTER.

Noah on the other hand was very sceptical about Williams’s attitude and he already had the paper work to break out of ODEO and become the CEO for Twitter but before he could make any major move Evan Williams fired him, hey do not be too quick to judge Evans because it was actually Jack who plotted against Noah Glass and had him fired while they were still very good friends. Years later, Jack became the CEO of twitter while Evans moved to the position of a chairman.

Twitter has grown to home millions of active users with world leaders using it daily as a means of sharing fast information globally with the chairman and CEO making millions from it but Noah Glass seem to have gone into extinction as no one seem to know his where about.

This story really got me and I had so many things running through my mind, I decided to share it with my friend and we both had different views, so I will like to know what you feel about the entire scenario, do you think Noah was betrayed, or is it just a normal business world where anything happens? No judgments, please feel free to share your thoughts with me in the comment section. Thanks for reading.

Thank you for sharing your experience and how a business grows with its opportunities and threats. since money is not anyone's friend.

Thank you for coming around.

This post has been rewarded by the Steem Community Curation Project. #communitycuration06

I really feel Noah Glass should not just kicked out of the company like that, there should be actleast an incentive or a portion of the company.

That is the business world for you my friend, this aren't always fair there.

Noah Glass must feel very terrible seeing what he missed out on, I feel his pain seriously.

We do not even know if he feels terrible or not.

There are many stories like this in the business world and whether it is right or wrong I don't know. But I do think in the world of business we need to be tough and not expect everything to be fair.

I get that.... Thanks for sharing your opinion buddy.

Hmm.... The history behind Twitter seems to be very astonishing and sophisticated even though I never knew such things had happened in the past before the Twitter became the top three social media platforms with billions of users around the world.

As for the question you asked, I think it's actually a battle of business men who are very greedy to earn more income and influence and they actually don't mind accomplishing their goals or aims in a cunning or brutal way. Jack who was once an employee in that company was able to make his way to the top as the CEO of the company due to what he told the chairman. I think Noah wants to have everything despite owning ODEO, he still went ahead to intend to have Twitter too. I think it's always great when we are contented with what we have no matter how small it may seem to be.

I love the point you raised.... Thanks for sharing your opinion buddy.

I really think there is more to this story, Noah glass must have the intention to completely own the company and because Jack probably trusted Eric's leadership ability more, he decided to go with him.