Abracadabra.... Do you believe in Magic ? As you speak, so will you create. (Chamber of Secrets) 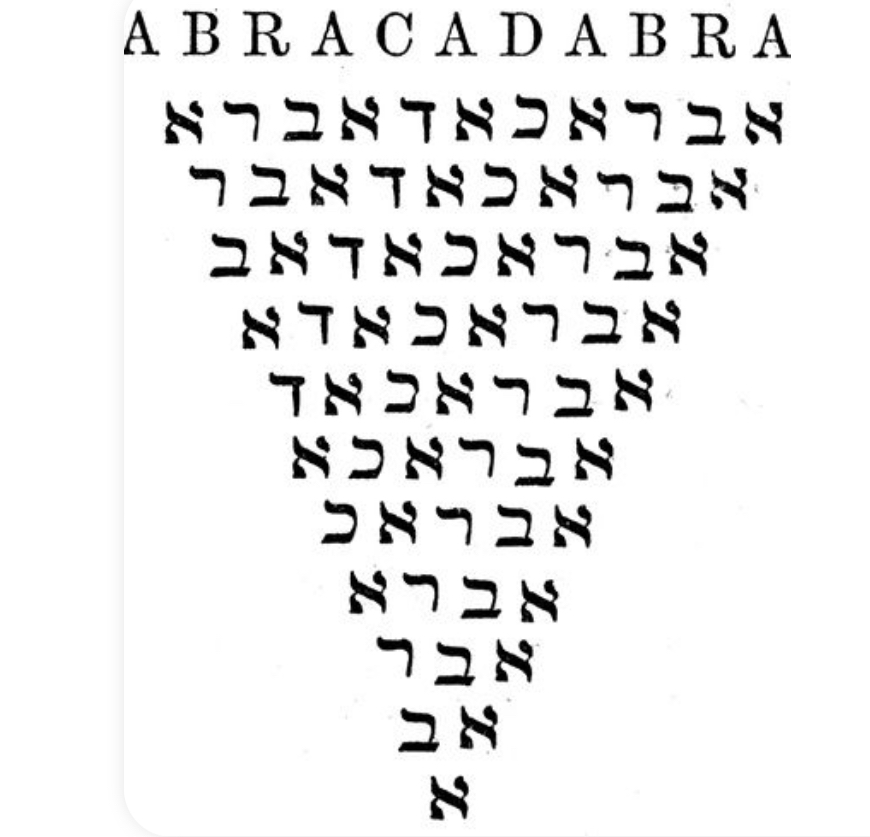 Do you believe that you can create things by speaking them out loud ?

This is the meaning of the words “Abracadabra “

I will Create as I speak...

It was also used as an amulet to protect those who had knowledge of its power from illness, disease or any harm ... Do you believe in the Magic of words written on amulets ? Can words be spoken to heal the sick ?

Is this all just hocus pocus ? Smoke and Mirrors ?

Several folk etymologies are associated with the word: from phrases in Hebrew that mean "I will create as I speak" or Aramaic "I create like the word" (אברא כדברא),

This is a very interesting diagram... if you can read Hebrew. From the Bottom.. Right to left ...

The first known mention of the word was in the second century AD in a book called Liber Medicinalis (sometimes known as De Medicina Praecepta Saluberrima) by Serenus Sammonicus, physician to the Roman emperor Caracalla, who in chapter 51 recorded that malaria sufferers wear an amulet containing the word written in the form of a triangle.

The power of the amulet, he claimed, makes lethal diseases go away. Other Roman emperors, including Geta and Severus Alexander, were followers of the medical teachings of Serenus Sammonicus and may have used the incantation as well.

It was later used as a magical formula by the Gnostics of the sect of Basilides in invoking the aid of beneficent spirits against disease and misfortune. It is found on Abraxas stones, which were worn as amulets.

Basilides was an early Christian Gnostic religious teacher in Alexandria, Egypt who taught from 117 to 138 AD, and claimed to have inherited his teachings from the apostle Saint Matthias.

He is believed to have written over two dozen books of commentary on the Christian Gospel entitled Exegetica, making him one of the earliest Gospel commentators. Only fragments of his works are preserved that supplement the knowledge furnished by his opponents.

According to Hippolytus, Basilides was apparently a pantheistic evolutionist, and according to Irenaeus, a dualist and an emanationist. Basilides taught that salvation comes through knowledge and not faith. This knowledge, or gnosis, was considered esoteric (Secret), revealed to human beings by the divine being, Jesus Christ.

The Gospel of Basilides is the title given to a reputed text within the New Testament apocrypha, which is reported in the middle of the third century as then circulating amongst the followers of Basilides (Βασιλείδης), a leading theologian of Gnostic tendencies, who had taught in Alexandria in the second quarter of the second century.

All these Secrets and more shall be revealed in the Chamber of Secrets ... https://noise.Cash/n/secrets