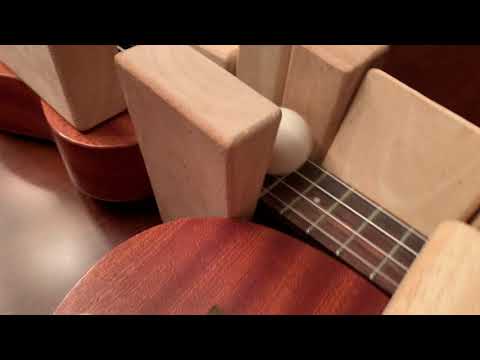 This is from a School Project my kids have to do in Grade 8 .... A Rube Goldberg Machine.

A Rube Goldberg machine, named after American cartoonist Rube Goldberg, is a chain reaction-type machine or contraption intentionally designed to perform a simple task in an indirect and overly complicated way. Usually, these machines consist of a series of simple unrelated devices; the action of each triggers the initiation of the next, eventually resulting in achieving a stated goal. In the United Kingdom, a similar contrivance is referred to as a "Heath Robinson contraption" after cartoons by the illustrator W. Heath Robinson.

This is just an early draft.

The Final machine is much more complicated and delivers a dog treat to our Puppy Lola. Have you ever built one of these with your kids ? It’s a lot of fun. Here is the short video we made with the iPhone XR ... stay tuned for the final Movie.

Maybe we should have a Rube Goldberg Machine Challenge here in the World of Xpilar ?

Everyone make a Rube Goldberg Machine, film the creation and final working prototype and share here with #rubegoldberg hashtag.

The trick was to find something that the foosball would roll down to eventually knock the jenga blocks down and send the treat into a food tray for Lola. We looked and looked then decided a few wood Ukuleles would be perfect. It’s the most we have heard from our ukuleles in months.