✨🧚Enchanting Fawn 🦌✨ - a Gift for my Daughter 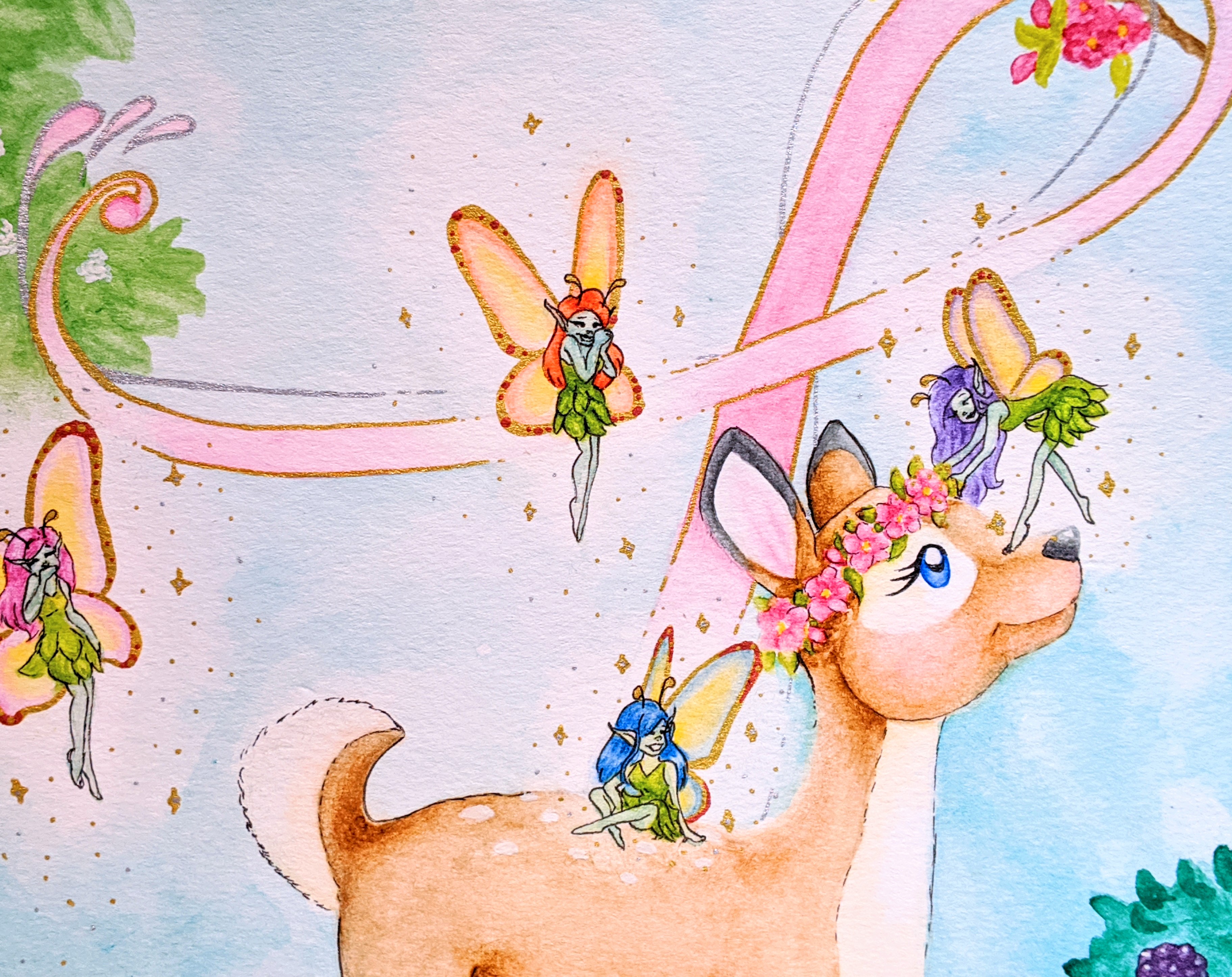 How's your week been?

Has everyone been having a chaotic start to their year, or is it just something being felt around here? I feel like the Saturn/Pluto conjunction earlier this month has had a larger effect on things than I was bargaining for. (I know some don't believe the planets or the moon have an effect on us, but we'll just have to agree to disagree.) The whole family's energy levels have been next to nil, and plans kind of keep getting waylaid... frustrating, to say the least. But I'm doing my best to just flow with things, rather than try to fight it, in hopes of making life slightly less frustrating. Plus, despite all that's going on, I'm holding myself accountable, and getting my butt in front of a computer long enough to share something with you all this week.

My last post was really well received, and I'm feeling really encouraged with all the positive feedback, so I'm bringing you all another art post.

This is a gift I made for Little Miss for her birthday this year past. I'd drawn up the fawn quite some time beforehand, with a number behind it, with the idea that it would be a birthday gift for her on a different birthday. But time got away from me, and I was having commitment issues, afraid to start the painting process, worried I would be unhappy with results, and not be able to replicate the sketch. I've since had a fair bit of practice with my watercolors, and am learning to let go of those insecurities, so with a quick change from a number to a letter (her first initial), and the addition of a few fairy friends, I got to work.

Here's a pic I snapped of the drawing, before adding the fairies. It was drawn with a 4H pencil, so the lines were quite light, making it tough to get a clear picture, but you get the idea.

I didn't take many progress shots, as I was on a mission to finish it in time for her birthday, and I'd procrastinated far too much, but here's one I snapped after my first sitting with it at a ladies' art night a friend of mine organizes from time to time.

There were several more sittings between the first and last, but whenever I found the time to get the paints out, I didn't think to take the extra time to snap pictures of the progress before getting started. After all, a mama needs to take full advantage of quiet moments, in order to be as productive as possible.

After I'd finished up with the watercolors, I went back over the painting with my metallic Sharpie paint pens, and added some gilding and sparkle here and there, then finished it in my usual way, outlining the subject in ink, using Micron pens. I used a light touch, to keep things looking soft and delicate.

Here are a couple crops, to better show more of the details:

I'm happy to say that Little Miss was thrilled to receive her very own painting. She loves the fairies, and says "awww, the baby deer is so CYYYUUUUTE!" She also appreciates all the shiny bits, which makes me happy as well... Girl after my own heart. haha

I finally found a large enough frame with a mat that I could custom cut to fit the painting, which I did just this week. Now she can enjoy looking at it whenever she's in her room, without me worrying about grubby little fingers making stains all over it. Of course, the frame had to have some sparkle too.

Now I've been requested to do up a painting for Wee Man's next birthday. He's put in several requests for subject matter, but being that this one was a surprise for his sister, it seems only fair that his be a surprise too. Fortunately, I think I know my kidlets well enough to be able to come up with something he'll enjoy. At least I have a while to come up with something... hopefully I've learned my lesson and don't end up leaving it to the last minute again. But I am admittedly a life-long procrastinator, so we will see how well I do with my "personal growth" this year. haha

That's all from me today - hope you enjoyed it!

I'm going to do my best to get working on something a little different for next week. Perhaps a food post, or perhaps a travel post. We'll see how ambitious I'm feeling, and how well things fall into place. Fingers crossed the next week will be slightly less challenging.

As always, if you have any suggestions/requests for future posts, feedback, etc, please feel free to leave a comment.