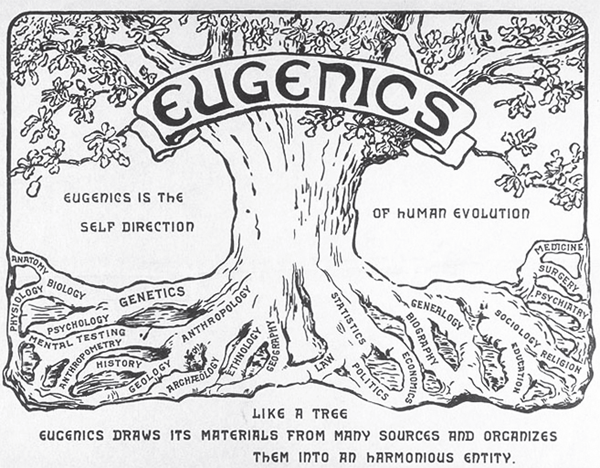 > Eugenic is study or belief in the possibility of improving the qualities of the human species or a human population, especially by such means as discouraging reproduction by persons having genetic defects or presumed to have inheritable undesirable traits or encouraging reproduction by persons presumed to have inheritable desirable traits.

are closely related to Nazism and include birth control, marriage restrictions, racial and mental segregation, forced abortion and sterilization in order to get rid of inferior races. Eugenics and theses about the superiority of "one" race was recognized and popular in USA during the early twentieth century. It was created as applied science and was a bio- social movement which suggested restoring genetic characteristics of populations trough direct and controlled birth. The worst part was that the elite saw eugenics as a tool for pursuing a higher goal where they will be the main leaders to decide on the course of developing mankind.

This theory was very popular in the early 20th century. It was advocated by many famous people, such as Leonard Darwin (son of Charles Darwin), Winston Churchill (who was also the Honorary President of the Eugene Society), Auguste Forel (the famous Swiss pathologist), Alexander Graham Bell, and of course all those who gathered around the thoughts and actions of the National Socialist Party in Germany. Eugenics has been controversial since its inception, and is the originator of epigenetics (mutations that are not transmitted by DNA, but cellular memory) by Thomas Hunt Morgan to a completely new level, experimenting with flies from the genus Drosophila melanogaster.

Unfortunately, they didn't stop at flies but rather replaced it with real people. Soon, they realized they will need a large number of population to achieve the eugenic goals as the elite wanted. Most of the experiments on eugenics and racial cleansing have been made on people in concubines, but the Nazis have invested heavily in research into twins, especially if they were twins.

In 1933, the Nazis adopted the "Law on Hereditary Disorders". Hundreds of thousands of people are then subjected to forced sterilization. In 1939 the murder of persons with disabilities began.
Hitler and his scientists were confident in their theory of racial homogenization, sterilized over 400 000 people without their consent in extremely bad conditions, while at least 70 000 was euthanized - Before war even started!

> The law on hereditary diseases "prescribes who as a" genetically ill "should be forced to sterilize, for example, people suffering from" innate weaknesses ", epilepsy, schizophrenia, hereditary blindness and deafness, as well as people with severe hereditary physical deformities "and alcoholics. In particular, the doctors welcomed the fact that a law was finally put in place on the basis of which an ancient genetic dream would be possible. "A word about a perfect society without" less valuable elements ".

Forced sterilization was performed in hospitals across Germany. Physicians did not hesitate to do it for minors: even 14-year-olds could have been sterilized, and in exceptional cases even younger children. Illusions of grace can be given to the sick, "Adolf Hitler wrote in one of his letters on September 1, 1939, on the day when the war began, and the more cruel phase of Nazi eugenics began: killing" less valuable. "The victims of euthanasia have been characterized as a" redundant burden "for which nothing can be done. What we can not cure, destroy, thought doctors who participated in the Nazi project," explains Christiane Rothmaler.

Physicians and medical staff are responsible for the selection and murder of helpless victims here. By August 1941, 70,000 people were killed by lethal injection or in gas chambers during the so-called "T4 Action. Eugenics has become a powerful weapon in depopulation of undesirable and less valuable races, layers of society, and disadvantaged characters, including those who are mentally and physically disadvantaged.

National Association of 20th Century Eugenics in the US

The United States is the first state to begin with forced sterilization, a law passed in 1897 in Michigan. After that, such laws were extended to other areas of the United States. The primary victims were Afro-American women, indigenous Indians, mentally disabled and mentally ill, epileptics, but this law also extended to physically deformed persons, criminals, deaf and blind people. For now it is known that in the 33 states of the United States sterilized over 65,000 people without their consent, while the number is even greater because in many cases in medical charts it is written that people agree to such a thing even if t he case was about people who are not comprehensible and who have had serious mental problems.

Forced sterilization imposed by state laws is a reality that borders with madness in the name of the democratic world, and although the Rome Decree declared this Eugenic law and practice to be a crime against humanity (signed on October 13, 1998), countries doing such work not reach the goal of the International Criminal Court in The Hague, regardless of the fact that this international institution is responsible for condemning any state that deals with anything like this.